Some netizens say that this might trigger those who are suicidal. 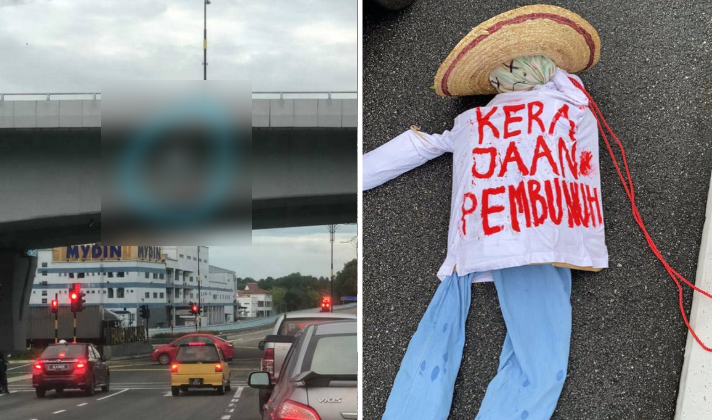 Life has been tough for Malaysians trying to survive with the country still struggling with Covid-19.

It has affected the livelihood of locals who are trying to make ends meet during this difficult period and this unrest has led some to show their protest.

Recently, a dummy was hung at a flyover in Melaka with the words KERAJAAN PEMBUNUH (murderous government) written on its “body”.

It’s reported by MalaysiaKini that the dummy was found by the public at the Jalan Tun Abdul Razak-Ayer Keroh flyover.

It caught the attention of Malaysians who were shocked by the brash nature of the protest when the pictures surfaced online.

org melaka is on to something pic.twitter.com/ySfOEckNJy

Netizens are quite divided on the protest

The pictures did gain traction with some netizens but there were others who were critical, saying that although Malaysians are disgruntled with what’s going on, that this is not the way that we should be doing it, they said.

Netizens also pointed out that we should be more careful in protesting, saying that it can trigger those who are suicidal.

It’s reported that the police have been notified of the incident and have removed the object.