Benjamin Glynn is allegedly stuck “under an oppressive legal regime” for “exercising his human right of freedom of movement without a mask”. 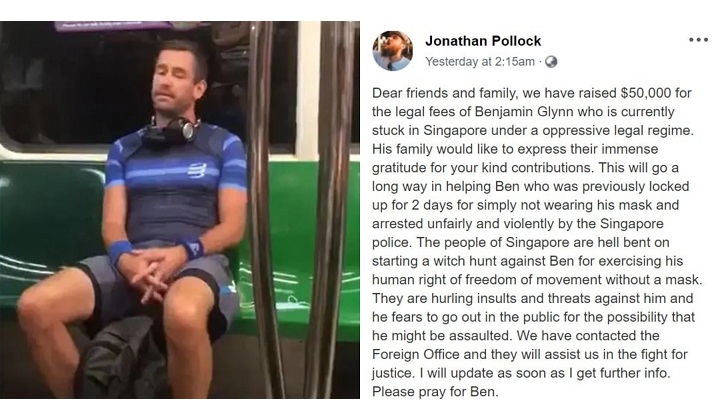 Someone who goes by the name Jonathan Pollock claimed that he has raised $50,000 for the now infamous 38-year-old British expat and anti-masker, Benjamin Glynn.

According to Mothership.SG, a Singaporean website, Pollock’s Facebook post states that the money was raised to pay for Glynn’s legal fees because he is currently stuck “under an oppressive legal regime” for “exercising his human right of freedom of movement without a mask”.

He has since been charged with failing to wear a mask without reasonable excuse, public nuisance, and using threatening words towards a public servant. These charges carry a total fine of up to S$17,000 and up to 21 months in prison.

While Benjamin is getting help from the Foreign, Commonwealth and Development Office in Singapore and financial help from fellow foreigners, if the post by Pollock is legitimate, he is getting no sympathy from us Southeast Asians.

Many called for Glynn to just follow the rules:

What a pile of bollocks. Do they expect Singaporeans to go UK and follow Laws of Singapore? Of course not! When in Rome do as the Romans do lah. What is so difficult?

Some even made special prayers for him in response to Pollock’s call:

I will pray for Ben to
a. lose data connection in toilets
b. screw up wifi connnections
c. lose one sock every laundry day
d. bite the inside of his mouth each time he eats his favourite food
e. have concurrent SMS bills from unknown sources
f. fail every ‘I am human’ test online

Of course, Glynn also has his defenders. But, those were quickly shot down with common sense:

As for the claim that Singapore is “an oppressive legal regime”:

The oppressive legal regime that has repeatedly managed to bring community cases down to less than 5 a day. Oh the horror 😂.

Where Would We Rather Be In Covid Times?

Did You Know There’s Malaysian Land INSIDE Singapore?