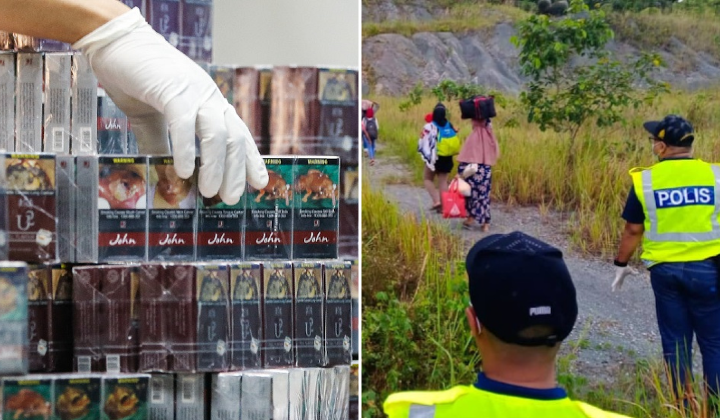 Malaysia has a problem in containing illegal cigarette smuggling as the demand for these items are encouraging syndicates to flourish in the country, especially throughout the Movement Control Order (MCO).

Home Minister Datuk Seri Hamzah Zainudin was quoted by Sinar Harian previously, saying that there are several factors that cause these offense to occur.

I understand with the situation of MCO, there may be those who want to reduce their expenses by switching from buying expensive cigarettes to cheap ones. Most cigarettes are cheap because they are smuggled and do not pay taxes.

In order to curb the issue, the government has intensified eradication operations such as Op Benteng by the Marine Police Force, the Malaysian Maritime Enforcement Agency and other agencies as smuggled goods can no longer enter the country’s waters.

He said the evasion of the crime caused the government to suffer huge losses involving tax collection of more than RM5 billion.

It’s reported by NST that Malaysia is currently the No. 1 country in the world for illegal cigarette trade where six out of 10 cigarettes sold in the market are illegal.

One of the reasons why cigarette smuggling has been rampant is due to the economic hardship and aggressive enticement by criminal syndicates, said Association of Certified Fraud Examiners’ (ACFE) Malaysian Chapter Datuk Seri Akhbar Satar.

He said that this causes more people from rural communities throughout the country to become accomplices in illegal smuggling activities.

It is found that there are too many small illegal jetties or illegal border routes (lorong tikus) along the Malaysia coastline. A recent case in point was the seizure of illegal cigarettes worth RM7.66 million from a small jetty in Endau, Johor, on 11 June by the Royal Malaysian Police.

The pandemic and the series of MCOs has taken a toll on the livelihoods of those in the rural communities, he said, and smugglers are taking advantage of this situation, as criminal syndicates tempt villagers to play a part in their illegal smuggling logistic chain.

Some of these criminals even pose as ‘white knights’, according to Akhbar, contributing generously to renovate places of worship or to build public facilities to “win the hearts and minds”.

It is not surprising that because of this, fishermen and farmers would rather smuggle cigarettes than tend to their vocation. It is more worrying to see that even some greedy and unethical law enforcement officers have fallen prey to this immoral scheme.

To get away with their crimes, smuggling syndicates either bribe or threaten enforcement personnel stationed in rural areas forcing them to turn a blind eye on their activities, but if it doesn’t stop, this dangerous industry can pose a serious threat to the socio-economic fabric of our rural communities.

But he mentioned that government has taken a serious series of measures to curtail illegal cigarettes trade introduced in Budget 2021.

The Budget 2021 measures are working to a certain extent, Akhbar said, but the government must be steadfast in implementing them as some quarters are pushing for a relaxation of selected controls, he said, especially those related to transhipment.

Criminals can be creative, and this can lead to their being more successful in their criminality. With criminals syndicates now changing their modus operandi to the coastal areas, waiting for the darkness of night to reengage in their lucrative cigarette trade, more enforcement measures must now be in place to stop it.In addition to increasing patrol and vigilance, law enforcement personnel most also be equipped with technology, improve its intelligence-gathering capabilities, continuously conduct operations and closely monitored with a periodic rotation system in place as ways of reducing the temptation for corruption.

The government has announced that they have strengthened enforcement along the country’s borders, especially in areas where there is a risk of having ‘lorong tikus’.

However, Akhbar said, joint intelligence and joint operations have to be carried out sincerely and truthfully for the nation without any hidden agenda and mentioned that price difference between illegal cigarettes and legal cigarettes must also be addressed effectively as this is one of the key factors why criminal syndicates are doing all they can to circumvent the law.

The more expensive legal cigarettes are; the more margins they can reap to bribe even more people! In spite of the on-going Covid-19 crisis and the political debate in relation to the opening of the Parliament, I strongly urge the Government to remain vigilant and pro-active in combating illegal smuggling activities that are causing a drain of much needed financial revenue and impacting the lives of innocent communities across our nation.

Why is this still a problem?

One of the reasons pointed out by experts is excessive taxation, such as imposing excise duties on the legitimate industries (cigarettes and liquors) to discourage smoking and promoting a healthy lifestyle while raising tax revenue, can also encourage the consumption of illicit products or rampant smuggling activities.

Socio-Economic Research Centre Executive Director Lee Heng Guie said to Focus Malaysia that this shadow economy is not as rampant in countries with relatively low tax rates, fewer rules and regulations as well as a well-established rule of law.

The term “shadow economy” refers to goods and services that are paid for in cash but are not recorded or declared for tax.

It includes proceeds from corruption, illegal gambling and illicit trade and it costs the country around RM5 billion in uncollected tax revenue every year.

It’s also estimated that Malaysia’s shadow economy accounts for 21% of its gross domestic product (GDP) or RM300 billion – based on the 2019 GDP nominal value.

In addition, weak governance with an ineffective and discretionary application of the tax system and regulations allows corruption to flourish. Some studies found that more corruption resulted in a larger shadow economy. Hefty regulation and compliance expenses raise the cost of labour to firms which pushed businesses towards the shadow economy.

Lee said that there are three ways to overcome this, namely:

He also mentioned other strategies such as improved tax administration, increased sharing of intelligence among government agencies, and setting up a task force to monitor sharing and gig economy activities which could contribute to the growth of the shadow economy.