Some might call it a generational entitlement, but Samson Knight disagrees. 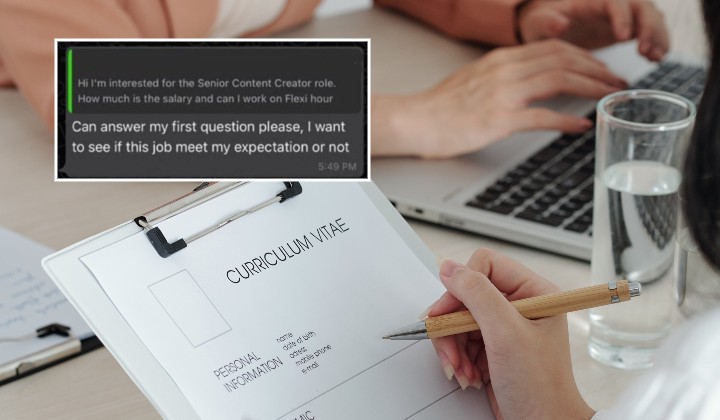 A fresh graduate’s demanding manner while asking after a potential Senior Content Creator job opening raised eyebrows when it was shared online.

Digital creator company Wolves Digital shared screenshots of the conversation between a potential applicant and the co-founder, Samson Knight.

According to Malay Mail, Knight had already picked up red flags at the beginning of the conversation.

Knight noted that the fresh graduate did not provide any kind of self-introduction. However, he was still willing to provide the applicant an opportunity to apply for the position, which is why he then asked if the applicant had a portfolio or a Curriculum Vitae (CV).

The applicant then replied that they did not have a portfolio or CV due to being a fresh graduate. Instead, the applicant suggested sending over their Final-Year Project (FYP), which is often a year-long project required to obtain a university degree for certain courses.

Shockingly, when Knight asked for an elaboration for what a FYP means, the applicant in return asked him if he had gone to university.

Then, the applicant insisted that Knight answer their question regarding details of the job opening.

In response, Knight declined the interest in the job opening, suggesting that the applicant work on their character before trying to join the industry.

As a final parting message, the applicant replied with ‘Kthx’, a colloquial shortform for ‘okay, thanks’.

Knight clarified that although this is the second time he had entertained a rude job applicant, he dismissed the common generational criticism that Gen-Z has an attitude problem

I like to think this is actually an individual problem instead of a generational problem.

He noted that the majority of his staff in Wolves Digital are Gen Z, and praises that they are actually very talented, driven, and passionate.