UMNO leaders respond to the latest statement made by their President. 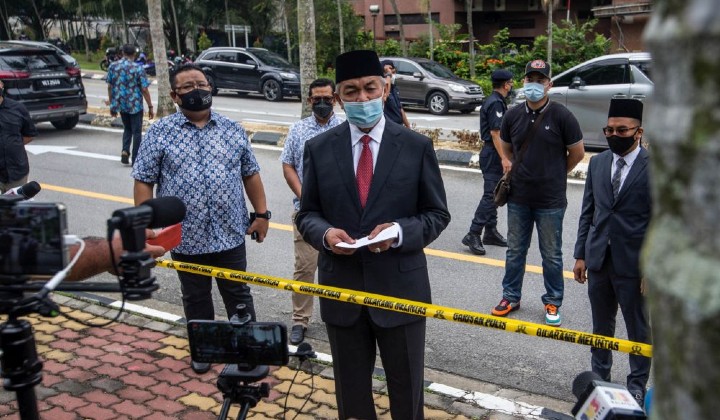 Utusan quoted the Bagan Datuk Member of Parliament who said that the government to respect the order of the Yang di-Pertuan Agong, Al-Sultan Abdullah Ri’ayatuddin Al-Mustafa Billah Shah and the Rulers to convene a parliamentary session within 14 days from the date of the statement by Istana Negara.

The government’s failure to implement the order, according to Ahmad Zahid, is considered as treason and disrespectful towards the Institution of Rulers.

Besides the President, other politicians within the Malay-centric party have also said their views on the matter, here’s what they said:

We haven’t talked about it, says Ismail Sabri

Malay Mail reported that the 14-day period issued by UMNO is the view of the the party’s political bureau and not the Supreme Council.

UMNO Vice-President Datuk Seri Ismail Sabri Yaakob was quoted saying that in principle, although the political bureau could submit an opinion, the party’s decision is still subject to the Supreme Council and so far, the Senior Minister said that the party’s top level members haven’t discussed on the issue yet.

Because of this, the Minister said that the party has not decided on what to do if the government does not open Parliament after the 14-day period.

UMNO Supreme Council member, Datuk Seri Shahidan Kassim said that while a majority of Barisan Nasional MPs agreed that Parliament should be reopened soon, it still requires a 28-day notice.

FMT quoted the Arau MP who went on advising those who want to criticise the government openly.

And if you want to give your views, make sure it is accurate.

He also took jabs at those labeling the current administration as useless, saying that they should keep in mind that a majority of the ministers are from UMNO.

Former Prime Minster Datuk Seri Najib Razak said those who govern the country should understand that the 28-day notice issued before the Parliament reconvenes can be considered void under the Standing Orders 9(2)(a).

He said in a post on his Facebook on Tuesday that the matter would not be a problem if the government did not want to use the existing meeting rules to set aside the minimum notice period.

Najib, however, also questioned whether the government had ever heard the phrase “an emergency parliamentary session”.

Regardless of whether the government has full Emergency power or not, if they are not able to overcome all the legal issues and regulations according to the order of the Conference of Rulers, don’t count on them to solve the people’s problems or manage the country properly.

UMNO’s Disciplinary Bureau and Supreme Working Committee (MKT) has been called to consider immediately suspending Ahmad Zahid following the leader’s latest actions which are alleged to have violated party rulings.

He said the first evidence was that he sent a letter expressing the support of all Barisan Nasional (BN) MPs to elect Opposition Leader Datuk Seri Anwar Ibrahim as the new Prime Minister to the Yang di-Pertuan Agong last year, without the knowledge of the majority of the MPs.

The second proof, he said, is the authenticity of the audio recording of his conversation with Anwar related to the UMNO General Assembly 2020.

The last evidence is Ahmad Zahid’s latest threat to the National Alliance (PN) government that Parliament be opened within 14 days, without referring to the party’s Supreme Council (MKT) and UMNO MPs first, based on reports from Sinar Harian.

The UMNO MKT and the party’s Disciplinary Bureau should suspend Ahmad Zahid immediately. UMNO is not his exclusive right but the right of more than 3.6 million party members.