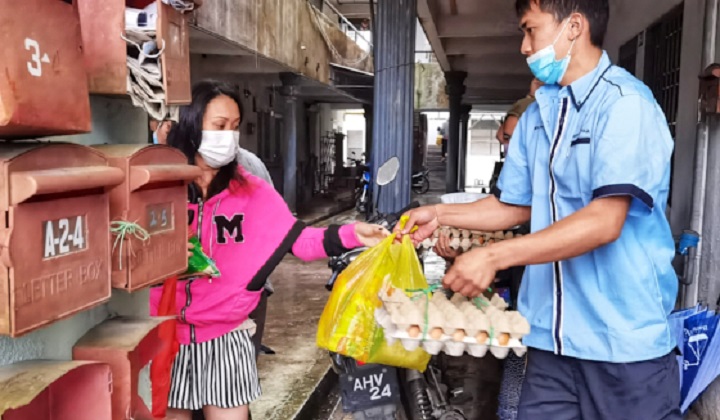 The farmers in Cameron Highlands were feeling quite concerned and worried for Kampung Raja when it was recently placed under Enhanced Movement Control Order (EMCO).

They wanted to help, and help they did.

“We thought that if we could do this fundraiser, we can get food and send it to them,” said Looi Kin Thor, the village chief of Ringlet.

Asking for donations from the farmers came naturally as a fundraising idea as, she said, Cameron farmers are very willing to help their most vulnerable community members.

Overnight, Looi and her team of volunteers collected more than RM18,000. The money was used to buy some 300 grocery packs, including eggs, rice, biscuits, condensed milk, and other daily essentials.

“Such initiative will make sure that our community stays connected and engaged during this critical season,” she said.

The bulk of the money raised came from the Bertam Valley community, an agricultural village near Ringlet town.

The contributions were made through MCA’s Crisis Relief Squad (CRSM), led by local youngsters.

On Saturday, it was raining when they distributed the groceries, but the foul weather wouldn’t stop the volunteers.

“We have always felt that it is important to help the communities where we live and work, especially during challenging times,” said Seow, a farmer himself.

Tan Choo Kuan, Cameron Highlands Wanita MCA chief, said many low-income members of the community – especially children and seniors – are under a tremendous amount of stress due to this EMCO.

“We want to do what we can to help eliminate hunger,” she said, and Kampung Raja folks were all praises for the items received.

“Every bit counts. This EMCO is yet another major setback during the ongoing Covid-19 pandemic,” said 56-year-old Samsul Baharin.

Agricultural activities in Kampung Raja were in limbo after it was placed under an Enhanced Movement Control Order (EMCO) from June 14 to June 27.