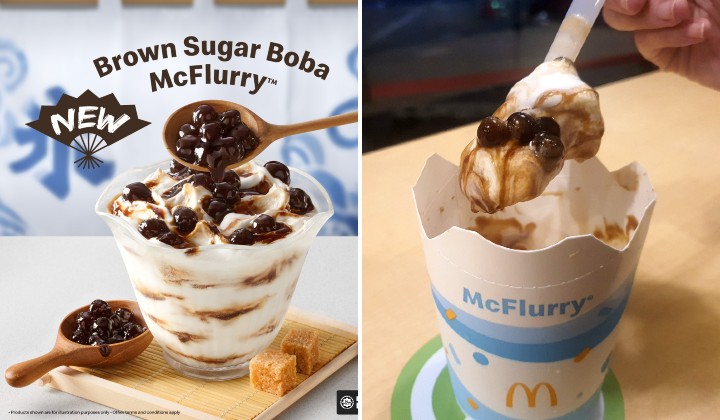 McDonald’s has just released their Brown Sugar Boba McFlurry, after the heydey of bubble tea has quieted down to a gentle simmer.

The McFlurry features the creamy cold ice-cream texture with cold, but surprisingly soft and chewy brown sugar boba. Some may like it as it is colder than usual bubble teas, where the boba itself is not cold, even though the drink is.

The boba balls themselves are cooked through and well-flavoured with the brown sugar syrup, so even though they are cold, they’re not hard. (If you have ever tried putting bubble tea in the fridge or freezer, you may have noticed that boba balls tend to turn hard upon being refridgerated.)

Fans of brown sugar bubble tea will probably love this, as it truly does taste like the drink. Yet the creamy, thicker texture of the ice-cream makes for a- dare I say- an even better match for the soft chewiness of the boba.

Instead of chewing on plain boba because you’ve swallowed the drink it came in, this ice-cream allows you to have both the creamy vanilla ice-cream and the boba at the same time.

While the toppings may seem sparse when you first recieve the dessert, make sure to mix the ice-cream well for the optimal ice-cream:boba:brown sugar syrup ratio.