Uyghur Bazaar Naan, also known as nang bing or the naan bread, is a leavened flatbread baked in a tandoor oven. 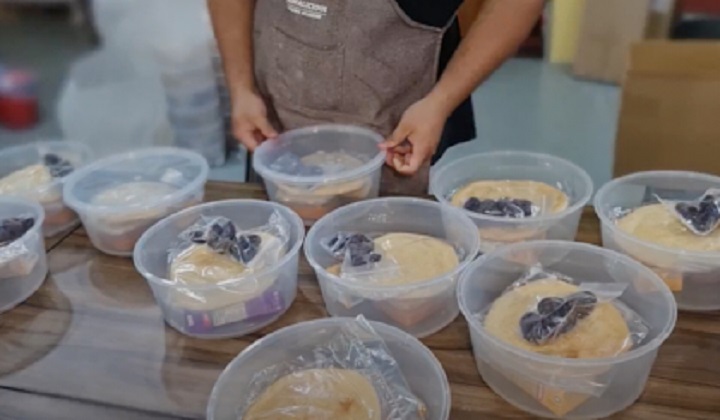 Uyghur Bazaar Naan, also known as nang bing or the naan bread, is a leavened flatbread baked in a tandoor oven.

A daily staple for the Uyghurs, Bazaar Naans are baked plain or with sesame seeds, while some have onions as the topping.

An Uyghur human rights advocate society in Malaysia baked their traditional Uyghur Bazaar Naan for the police force to enjoy during iftar (breaking of fast).

The gesture was part of NaanTime, a new initiative to celebrate Uyghur culture organised by Malaysia4Uyghur.

Some 300 Uyghur Bazaar Naans were distributed to the men and women in blue at the Tun H.S. Lee traffic police headquarters.

Malaysia4Uyghur president Zuhri Yuhyi said they struck on the idea of using it to advocate the Uyghur cause after realising that food is the language of every Malaysian.

Malaysian cuisine is a national obsession, and it also unites us as a nation. Naturally, to create awareness of Uyghur culture, food is the medium of choice for Malaysians.
Uyghur Bazaar Naan is a signature food representing Uyghur society in Malaysia. We would also like to take this opportunity to thank our frontliners leading the fight against the COVID-19 pandemic.”

Yuhyi learned about Uyghur food and culture from his travels to Urumqi and Kashgar, the two most important cities in Xinjiang and oasis towns on the ancient silk road.

Fahmi Shamsudin, CEO of Global Peace Mission Malaysia, said: “By experiencing Uyghur cuisine, hopefully, people will be more aware of the plight of the Uyghurs.”

“We hope to keep creating awareness infringement of Uyghurs’ human rights,” he said.

At the same time, Association of Nexgen Christians of Malaysia (ANCOM) advisor Jason
Leong noted that NaanTime aims to highlight the Save the Mosques in Xinjiang  (SMX)
campaign.

Leong said there are fewer mosques and shrines in Xinjiang at any time since the
Cultural Revolution, a socio-political movement in China from 1966 until 1976.

He cited a report by the Australian Strategic Policy Institute (Aspi) on September 2020,
which claimed that 16,000 mosques in Xinjiang had been destroyed or damaged.

Some were demolished to build public toilets; ironically, these toilets are closed to the public.

Beijing has rejected such claims. With over 24,000 mosques, there are more mosques per capita in China than in many Muslim countries.