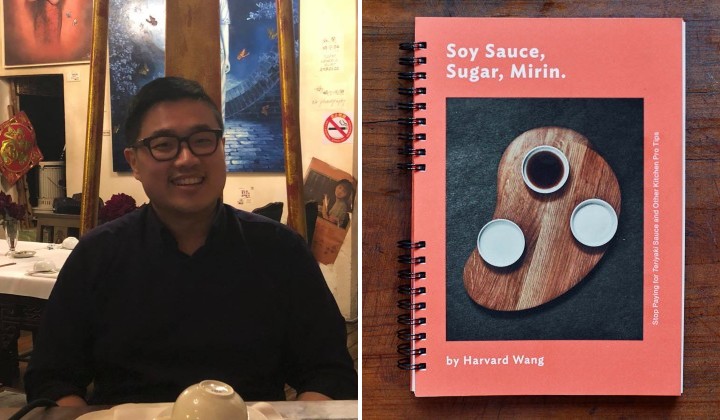 Harvard Wang is not a chef. He’s a homecook who had to learn how to cook because what Malaysian can afford to eat out everyday in Melbourne?

Yet when he began sharing his usual everyday recipes on Facebook during lockdown, he never thought they would become so popular.

My very first recipe for Japanese curry got over 2,000 likes overnight on Subtle Asian Cooking.

His cookbook has sold globally, being sent internationally to the UK, Canada, Ireland, Singapore, Malaysia, Taiwan, though a majority of the orders came from America.

Harvard dedicates his love of food to being born Malaysian. Due to our varied cuisine– Malay, Chinese, Indian, you name it– Malaysians tend to have a wider palate and are more accepting of various cuisines regardless of their political or ideological stance.

We may be racist, but we’ll eat your food.

As a result, he doesn’t think a specific culture can “claim” a food because it all comes from shared experiences.

Universally, carbohydrates such as noodles and rice made up a majority of food because it was what poor people had. Then, they had to use local ingredients or what was available and try different methods to make it taste good. A lot of the time, humans decided the same combination of things taste good together.

Harvard doesn’t divide food into cuisines: in fact, he boldly claims that paella is just Spanish fried rice. (In fact, paella is the Spanish word for a shallow wide pan that the dish is cooked in, which sounds a lot like what a wok is.)

It’s not just the recipes

He doesn’t hold food and cuisine in reverant wonder– he tears down the mysticism into practicality in his collection of recipes, published as a cookbook called Soy Sauce Sugar Mirin. The name itself is a nod to the base components of Japanese teriyaki sauce, long thought of as a special, unmistakable symbol of Japanese food, but in reality a super simple staple with just three ingredients.

Soy Sauce Sugar Mirin‘s subheader reads “Stop paying for Teriyaki Sauce and other kitchen pro tips”, which should give you the impression that this collection of recipes would be brutally honest and no-nonsense.

But Harvard’s cookbook didn’t sell out just because his recipes are practical and easy (even though he wishes that more people would actually just TRY cooking his recipes instead of just reading it).

His recipes are popular because they include plenty of commentary on the globalized Asian experience: written for the third culture kids, the asians who live away from their home country but are heavily influenced still, the ones who learn about asian racism well into adulthood, the ones who bounce between the east and the west.

There are profound observations delivered in a signature witty style interspersed with his solliloquays about food.

In his recipe for Korean japchae, he talks about soft power: how, thanks to Korea’s perceived higher status on the global playing field, a very basic dish of cold Korean noodles tossed in sesame oil and various vegetables can sell for more than $10 (~RM30), when the same noodle dish made Chinese-style is considerably cheaper.

There’s no wrong way to make this because the name translates to ‘freestyle veggies’. It’s chop suey, it’s Malaysian Rojak, it’s Hokkien Jap Chai. It’s salad, but palatable for Asians. Japchae, for me, is the Korean aglio e olio.

Harvard admits that for most Asians, the culture of food and eating is a bonding session.

One of the only times [your parents] are being openly honest, to their kids or to themselves, is when food is involved. You ask your dad whey he married mum, he changes the subject. You ask him about tea or whisky or red wine, he won’t let you off until 2 am.

In a way, food– and by extension, his cookbook– acts as therapy.

He notes that growing up in Malaysia, learning to cook was never emphasized. In fact, it was discouraged, with children often being asked to go study instead.

There’s a feeling as if the end game is to have someone cook FOR YOU.

Additionally, the rise of MasterChef and similar spotlight on gourmet celebrity meals made cooking something that only talented people can do.

With Soy Sauce Sugar Mirin, Harvards aims to break down the “magical barrier” regarding cooking. Everyone can cook– although to be fair, he conceeds no one wants to cook at home anymore.

When asked why he does not have any Malaysian recipes in his cookbook, his reply is simple.

Malaysian food is too hard to cook. It’s very complex and often takes many hours. In Malaysia, the context is also different– it’s easier to eat out than to cook at home.

Still, he hopes that Malaysians can learn to eat more diverse food, though he realizes that that’s what Malaysians do already anyway.