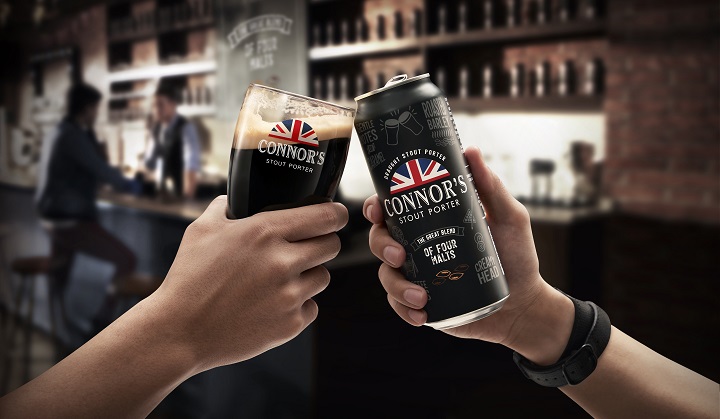 Canned beers are… well, they’re nothing compared to a freshly poured beer on tap. But now thanks to magic science, fans of Connor’s Stout Porter can now have the iconic draught stout experience from a can!

Using the prowess of nitrogen and good ol’ inertia, a can of the Connor’s Stout Porter is now a couple of shakes away from being a fantastic draught stout with the gentle “roasty” undertones that is freshly served at bars, but in the comfort of your homes.

The secret is by double-dosing the British-inspired brew with nitrogen before canning.

This results in a pint featuring the iconic smooth head and fine cascading effect when freshly poured!

We’re very proud to introduce another innovation with Connor’s Draught in a can, giving stout lovers the opportunity to ‘Taste the Good Times’ anywhere, anytime! With our first-ever use of nitrogen double-dosing in a can – which is also a first among all Carlsberg markets globally – consumers can now enjoy the Connor’s draught experience both at home and at their favourite bars. As a bonus, the new shake-before-opening ritual is not only surprising and fun, it’s also crucial in recreating the look and taste of premium stout straight from the draught tap.

How to shake it up with a Connor’s Stout Porter draught experience from the can:

These stylish Connor’s cans come in 320ml and 500ml sizes and available at supermarkets, hypermarkets, convenience stores, e-retailers and selected bars, bistros and restaurants from April onwards, but with some exclusive promos of course!

9,000 Connor’s cans will be given away for free at participating 7-Eleven and MyNEWS outlets from 15 April 2021!

All you need to do is register at MyCarlsberg.com/Connors where a unique redemption code will be given upon successful registration.

You can top up just RM1 to get a 320ml can of Connor’s with any purchase on Carlsberg’s official stores on Shopee and Lazada, as well as of Carlsberg brands on Potboy and Pandamart.

Meanwhile you can win limited-edition Connor’s playing cards, coaster sets, and the grand prize of a 24-can carton of Connor’s on the spot at participating supermarkets, hypermarkets and convenience stores. Simply purchase RM25 and above of 4-can packs of Connor’s to participate in the Connor’s Taste the Pub experience!

Customers who purchase RM25 and above of Connor’s in cans between 1 April to 31 May online or in-store will also stand to win 15 weekly grand prizes of a limited-edition Connor’s Dartboard and 80 weekly prizes of a Connor’s limited-edition bomber jacket through its national consumer promo contest.

Free Connor’s cans are also given away at participating bars and bistros with any purchase of three full pints or six half-pints serving draught Connor’s, while stocks last. There’s also a chance to participate in the national consumer promo contest between 19 April and 23 May.

Best of all, Connor’s is offering more chances for fans to share and Taste the Good Times with contests on social media, where the first 300 fans who share the launch posting on the ConnorsMY Facebook page (HERE) and tag a friend will win two 320ml cans of Connor’s and an exclusive Connor’s glass delivered to their doorstep.