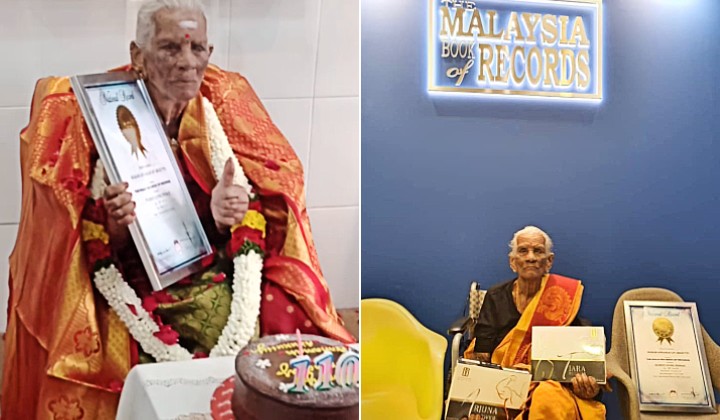 Perak resident Annamah Abukutty recently made her way into the Malaysia Book of Records (MBR) as the oldest living woman and person in Malaysia after celebrating her 110th birthday on 31 March 2021.

“Paati Annamah”, as she’s affectionately called, grew up in the village of Thachambadi, India before migrating to old “Malaya” prior to World War II sometime in the late 1930s.

Building her life here since then, Paati Annamah is now the mother of four children, 17 grandchildren and seven great-grandchildren.

Despite being bound to a wheelchair and blind in her left eye, the great-grandmother is well respected among her community in Batu Gajah – being the go-to person for health advice.

Paati Annamah is known for her wisdom in things like midwifery or with pregnancies and childbirth, as well as her knowledge in reflexology and even tattooing.

People also seek out secrets to her impressive longevity which she reveals to be thanks to her practice of taking traditional home-grown herbs and medication, fasting as well as meditation.

In fact, it is said that Paati Annamah’s secret herbs and medicine are also available for purchase on the market, which you can check out (HERE).

As of 2020, 7% or over 2 million people out of Malaysia’s estimated population of 32.7 million was made up of people over the age of 65, and over the years there have been many claims for the title of the oldest living Malaysian.

That same year, a woman by the name of Safiah Ujang from Negeri Sembilan reportedly passed away at the age of 128.

In 2018, 118-year-old Che Will Daud from Kelantan made headlines when he became one of the oldest citizens to cast a vote during the 14th General Election (GE14).

In November 2020, it was revealed that the oldest living person in the world may have been a Malaysian man who tragically died from Covid-19 at the Tawau Hospital in Sabah at the age of 130 – surpassing the title held by 122-year-old Jeanne Louise Calment from France who died in 1997.