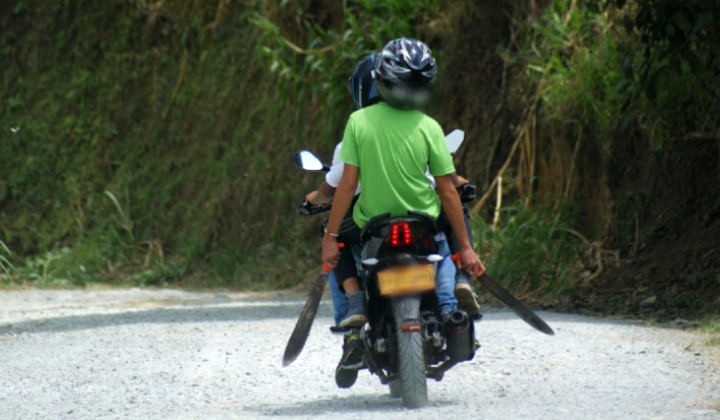 A National Anti-Drug Agency (AADK) raid at Batu Kurau, Perak met an unexpected snag in the form of a mother’s wrath. A 60-year old woman stood fast in her doorway wielding a parang, in an attempt to protect her two sons from arrest.

The sons, aged 18 and 20, were wanted by the anti-drug agency on suspicion of possession and use of narcotics. AADK had the house surrounded, but the mother’s actions allowed time for her two sons to attempt escape.

It took 30 minutes for us to convince the lady to cooperate with AADK, allowing us to enter and check her house.

Perak AADK Deputy Director of Enforcement A. Reuben said the two sons had successfully fled previous raids and were identified as hardcore addicts. In this encounter, the pair went as far as climbing on the roof to evade capture, yet failed as AADK had already surrounded the house.

While no narcotics were found on the premises, urine tests done by AADK on the two addicts came back positive for drug abuse.

The brothers were two of 36 locals arrested between ages 16 to 56, including one drug dealer, in Op Perdana. The operation aims to thwart drug abuse in the Larut, Matang and Selama districts.

Reuben mentioned that in the duration of the operation, AADK has managed to confiscate 55.29 grams of morphine, valued at approximately RM1,000 on the black market.

A total of 40 individuals were tested for drug abuse via urine tests. Three were positive for marijuana, 22 on meth, 10 on morphine, while five who tested negative were released and one was detained due to possession.

All who were arrested and showed positive for drug abuse will be investigated according to Section 3(1) Drug Addict Act 1983 amendment 1998, while suspects caught in possession have been handed over to the police in accordance with Section 39B Dangerous Drugs Act 1952.

A. Reuben advises the public to give their full cooperation to AADK as it is key in ensuring the full recovery of drug addicts, adding that efforts to thwart drug abuse and distribution will be enhanced from time to time to ensure the peace and safety of the districts and their residents.

In another case, a whole family went as far as conspiring to open the door late, to aid the escape of an addict.

If this attitude persists among family members, it will be difficult for an addict to recover as the addict’s defence mechanism will remain strong so long as the family continues to make excuses for them.