The Indian community in Malaysia considers the term “keling” to indicate disrespect, and to be a racial slur used as a derogatory term against them. 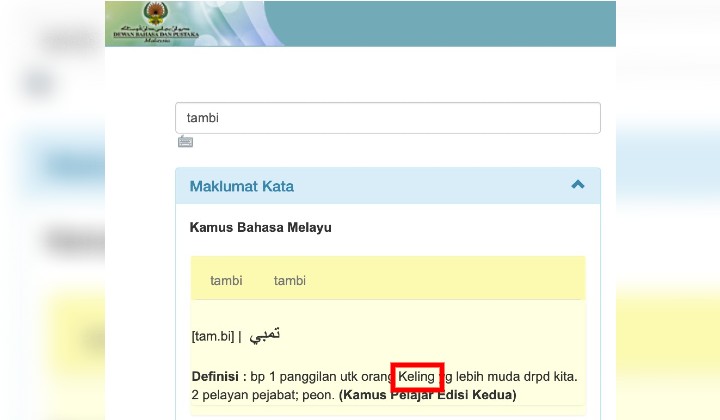 Dewan Bahasa dan Pustaka (DBP) is receiving heavy criticism over the definition of the word ‘tambi’ in the their website. This is after DBP defined the word ‘tambi’ as “a call for Keling people younger than us”.

Meanwhile, ‘tambi’ is a Tamil word meaning ‘little brother’ , and is frequently used by the larger Malaysian community as a whole as, a term of affection.

Thiagaseelan Ganesan, a MIC Youth Member criticised DBP on a Facebook post, asking “What’s the justification for the given definition? What’s the urge to use the word ‘keling’ instead of ‘orang India’ ?”

The Indian community in Malaysia considers the term “keling” to indicate disrespect, and to be a racial slur used as a derogatory term against them.

An Insult To The Indian Community

I condemn this action for insulting the entire Indian community. This is unacceptable. This is a direct insult.

Shankar said he would send a notice to DBP demanding an apology.  “They need to apologise to the public and also need to remove the word ‘keling’ from their portal.”

The government should look into this matter and warn all government sectors to ban the use of insulting words against any race in Malaysia.

When contacted, DBP director general Abang Sallehuddin Abg Shokeran said that they would look into the issue, “I will be thorough and give feedback later.”

Checks by TRP show that the definition has been changed to “orang India.”