They have to be cautious to avoid misunderstanding and problems. 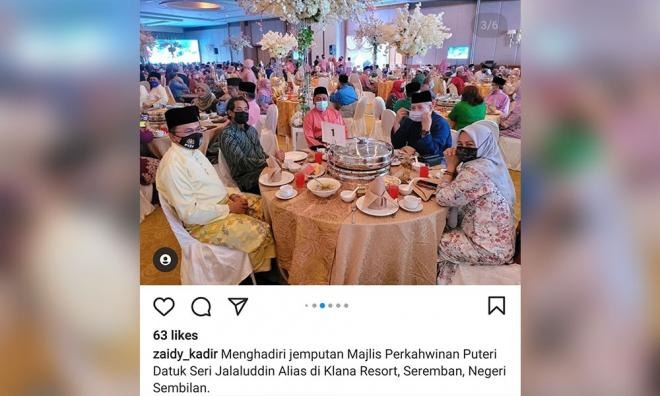 However, they have to be careful when it comes to probing politicians and ministers to avoid causing any misunderstanding and further problems later on.

It was reported that several Ministers travelled interstate recently to attend a wedding reception on 14 March.

The wedding is not the only incident on their radar as the recent cycling event attended by Housing and Local Government Ministry Datuk Zuraida Kamarudin and another event attended by Federal Territories Minister Tan Sri Annuar Musa were also being investigated.

People are not happy

With the government deciding to increase the compounds for SOP breaches to RM10,000, people were furious when they find out that prominent individuals appeared to be disregarding the rules.

One Twitter user pointed out that the event was held during a time when interstate travel is not allowed.

Another user even tried to message UMNO Youth Movement Negeri Sembilan Chief Datuk Mohd Zaidy Abdul Kadir who allegedly posted the event on his Instagram to explain the situation.

In the aftermath of the incident, MUDA launched a police report on the Ministers and have listed down a list of the offenders, according to reports by Kosmo.

The Ministers named by Muda include:

They even have a website called lapormenteri.com up and running for whistleblowers who want to report on Ministers who have breached SOPs.

Based on reports from Harian Metro, the RM10,000 compound for breach of standard operating procedures (SOPs) under the Emergency Prevention and Control of Infectious Diseases Ordinance 1988 (Amendment) 2021 is applicable to all categories of the Movement Control Order (PKP).

Senior Minister (Security) Datuk Seri Ismail Sabri Yaakob said that it applies in all states or localities as long as the SOP is in place.