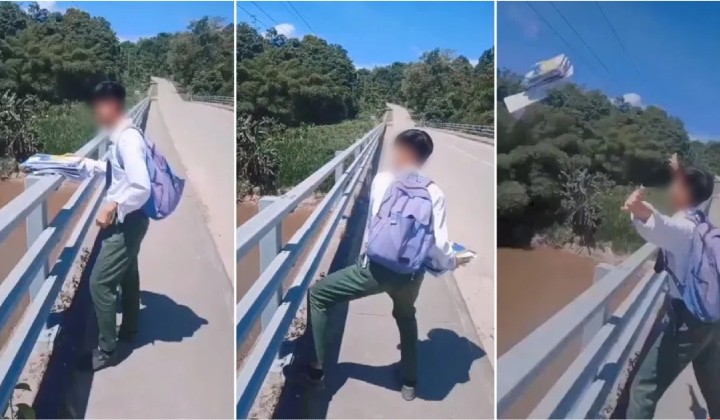 A high school student who was captured on video tossing his textbooks into an undetermined river isn’t just facing outrage at his irresponsible behaviour and treatment of the textbooks.

His viral celebration of finising his SPM examinations has also caught the eye of the relevant Ministry.

Instead of lambasting the student, the Environment and Water Ministry (KASA) cheekily offered him a membership to join Friends of River Malaysia, and volunteer activist group that cares for the cleanliness of rivers.

KASA invited him to a nationwide river cleanup program on 22 March in conjunction with World Water Day so that he could learn to care for and love the rivers as well.

KASA also notes that through proper education and community intervention, this boy and other younger kids can be more aware of the health and cleanliness of our rivers, and to prevent such littering from happening again.

Previously, the teen was criticized for “chasing clout” by throwing his textbooks into the river.

Many people criticized his choice to toss the books away just for a video, noting that the textbooks could have been easily passed on to his juniors for use this year.

READ MORE: Secondary School Kids Being Immature Online Have Netizens In A Fit