This week’s Darwin Award goes to… 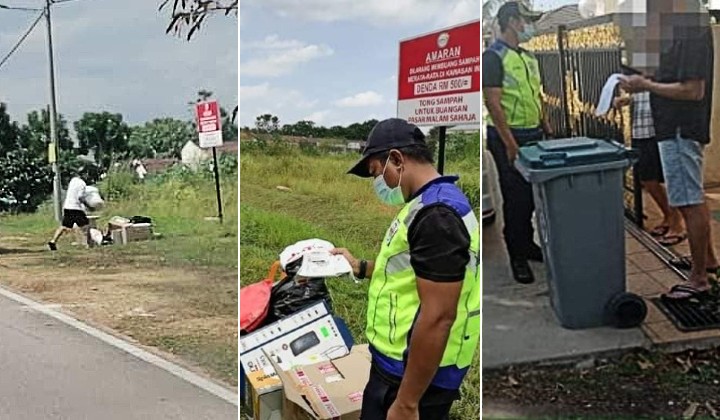 It appears that a household in Melaka got a free “Pendidikan Moral” lesson after they were tracked down and fined by authorities for allegedly littering somewhere they’re clearly not supposed to.

Several viral images captured scenes of authorities investigating an empty plot of land which had unfortunately become an illegal dumping ground filled with all manner of garbage.

The sign read that the plot of land was only to be used by night markets or pasar malam traders to dispose of their waste – A fine of RM500 would be charged to anyone who broke the rule.

Pictures shared on social media showed authorities rummaging through the garbage before supposedly identifying the alleged culprit from a discarded delivery package addressed to a “75450” Melaka postcode.

A final image which indicated that it was captured on 7 February 2021, showed authorities confronting the alleged litterbugs for their offence.

Overall, netizens had ruled that pollution was a serious crime and that the culprits got what they deserve.

Normalize this kind of compound

My wife goes around the neighbourhood every other morning while I do my morning runs, picking up garbage thrown by irresponsible people and by the time I’m done, she can on most days collect 3 bags full of trash 😑. I really abhor people like these!

In 2019, Housing and Local Government Minister Datuk Zuraida Kamaruddin claimed that Malaysia’s attitude to keeping our environment clean was dismal – revealing that 60% of the country’s 35 million inhabitants fail to use garbage bins that have been provided to properly dispose of waste.

However, according to the Department of Statistics (DOSM), Malaysia saw a small victory in 2019 when the nation’s recycling rate reached 28% compared to 24% in 2018. But our recycling capabilities are still said to be trailing behind other Asian countries like South Korea and our neighbour Singapore who’s recycling rate were recorded at 53% and 34% respectively.