Viral video shows a car allegedly making an illegal u-turn on a road made narrower by other cars are parked along the side, and the altercation that followed. 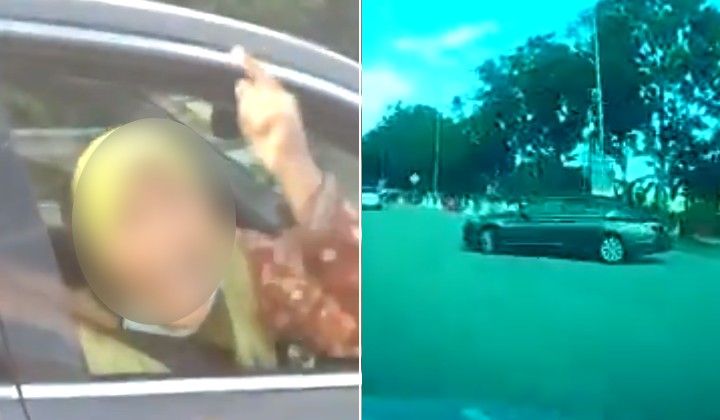 A heated argument between two drivers recently caught the attention of netizens recently as a woman believed to be a doctor was seen screaming hateful comments to another driver in a road rage incident.

The heated exchange is believed to be sparked after she was honked at for making a u-turn at a traffic light junction.

The incident was posted by Twitter user @Fadzmin_ who first tweeted a dashcam video showing the sedan trying to make the turn in front of Hospital Serdang. In the video, it’s seen that the traffic light was green for him.

He told TRP that he was heading to MAEPS Serdang from Kajang.

In the post, he claimed that the perpetrator was a doctor and tagged the Communications and Multimedia Ministry and the Health Ministry, questioning the integrity of their staff.

@kkmm_gov @KKMPutrajay, does this reflect the behaviour of a doctor? The location is in Hospital Serdang. The way that she u-turn is hazardous to other road users and provoked excessively after that. Is it reasonable for a doctor to pray that others would be infected by Covid-19?

In a follow up tweet, @Fadzmin_ showed a clip of the altercation with the woman spewing vile comments and curses, including praying that he gets infected with Covid-19.

The screaming match happened when both vehicles stopped further down the road at another traffic light.

In the thread, he also mentioned that the woman shouted at him while flailing a stethoscope showing that she’s a doctor.

He later explained to TRP that the tweet was posted as a lesson to other road users to take responsibility for their actions.

Netizens were divided as to who was wrong in this issue with some blaming the municipality for not providing the parking space for cars to park, forcing drivers to park at the side of the road and block the flow of traffic.

Back to route cause.

Some also pointed out that the woman actually made an illegal u-turn as the traffic light only allows for vehicles to go straight.

Others blamed @Fadzmin_ for not driving his vehicle properly and trying to make the incident viral.

So, who is at fault here? Watch the video for yourself and decide: