There and back again: Malaysia’s Covid-19 tale. 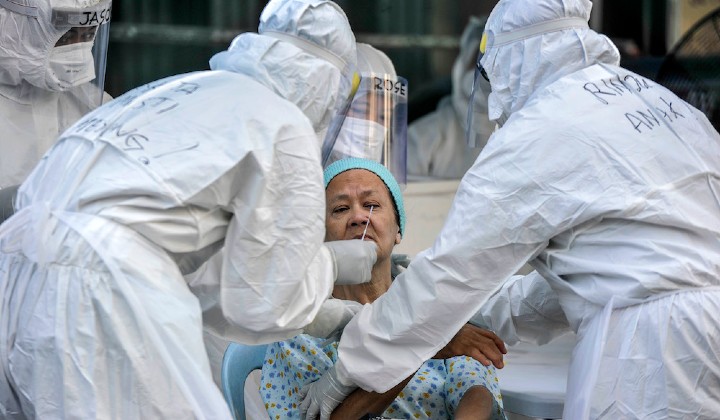 It has been a full year since Malaysia’s first Covid-19 case and we can confidently say what a wild ride it’s been. In case you forgot, here’s how it went:

The first reported cases were in Johor Bahru involving a 65-year-old woman and two children – aged 2 and 11. The family was part of a group of 10 Chinese nationals from Wuhan who had flown from Guangzhou to Singapore on 20th January 2020, before entering Malaysia. One of their members had tested positive for Covid-19 in Singapore and was quarantined in the republic while the rest of the group travelled to Malaysia.

A total of eight positive cases were reported within 6 days, starting from the first case. All of these cases were imported from China.

The first Malaysian testing positive for Covid-19 was reported on February 3, 2020; this person had a history of travel to Singapore for a business meeting, which was also attended by a delegation from China.

A sudden significant increase in the number of positive cases was reported on 4th March 2020.

These new cases were found to have been in contact with Case 26, who had attended at least five different meetings or gatherings. The alarming high number of cases reported originated from the cluster of Case 26, with a history of travel to Shanghai, China. The cases reported within this period consisted of Malaysians.

The Tablighi Jamaat religious conference that took place at Masjid Jamek Sri Petaling from 27 February to 1st March 2020 became a Covid-19 super-spreader event that sparked the first wave of infections in Malaysia.

The religious gathering was attended by approximately 16,000 attendees, including about 1,500 from outside Malaysia. Attendees shared food, sat close together, and held hands at the event – causing Covid-19 to spread to other countries in Southeast Asia

The cluster was first detected on 11th March and infected a total of 3,375 individuals who attended the four-day tabligh gathering as well as their family members.

More than 100 cases were reported each day, with more than 50% of cases having a history of attending or contact with the new cluster from the religious gathering in Sri Petaling.

He is the first Malaysian to die of Covid-19. The pastor was part of the Good News Fellowship Conference cluster, related to a church conference on held from 26-28 February.

7 May 2020 – Growing cases among migrant workers

From 7 May to June 12, 2020 (37 days), the number of non-citizens recorded positive Covid-19 rose tremendously from 9 cases (daily cases) to 1413 – about 72% of the total positive cases recorded during the same period

Since early May 2020, there were also a growing number of new Covid-19 clusters created, involving different groups of migrant workers. These include, amongst others, four immigration detention centres’ clusters in Bukit Jalil, Semenyih, Sepang and Putrajaya, Pedas Linggi cluster which was found and announced on 2nd May 2020, cleaning company cluster on 29th May 2020; and several construction site clusters in Kuala Lumpur and Setia Alam (Selangor).

The number of Covid-19 cases in the country jumped to 277 after weeks of single digit cases. Of this number, 271 cases were non-Malaysian citizens, including 270 cases from the Bukit Jalil Immigration Detention Depot. One other non-Malaysian case was from a construction site in Pudu.

Malaysia reported no local transmission of Covid- 19 and one imported case on 1st July. The new case is the lowest increase in daily cases since the second wave of infections began. Zero local transmissions were also recorded on 8th and 9th July.

The Sivagangga cluster originated from Napoh, Kubang Pasu after an Indian man disobeyed quarantine order upon his return from Sivagangga, a town in Tamil Nadu, India.

The 57-year-old man, who is also the owner of the Nasi Kandar Salleh Restaurant was seen at his restaurant during Hari Raya Haji wearing a pink quarantine order wrist band and later tested positive for Covid-19 on 28th July. 45 positive cases were linked to this cluster.

While the origin is unknown, the spread of the Tawar cluster from Baling, Kedah is attributed mainly to the lack of safe physical distancing during a family gathering.

The Tawar cluster’s index case (Case 9,113), a 53-year-old man, had attended the funeral of a family member that saw 30 people in attendance. However, it is not known how he got infected.

The Ministry of Health (MOH) said it found the D614G coronavirus strain in the Tawar cluster. MOH stated it’s a possibility that the Tawar and the Sivagangga PUI clusters most likely originated from the same source.

On 11 September, Malaysia’s new Covid-19 cases quadrupled from just 45 cases the day before, to 182 new cases the next day — of which 181 were local transmissions and one imported case.

This spike in new cases was caused by a few clusters: the Benteng Lahad Datu (LD) cluster in Sabah and two clusters in Kedah, which are the Sungai cluster and the Telaga cluster.

Sabah saw a sharp increase in cases since 7th September due to the Benteng Lahad Datu (LD) cluster. More cases were then traced at the Tawau prison – some 150km away – after several inmates with travel history to the Lahad Datu police headquarters tested positive.

The number of cases in Kedah shot up since 8th September, when the Sungai cluster in Kedah recorded a rise in Covid-19 cases. The cluster originated from a 39-year-old healthcare worker at a private medical centre who had infected her colleagues and family members.

The Sabah state election was held on 26th September and since then, many of those returning from the state had tested positive for Covid-19.

The third wave is driven by cases from clusters in Sabah and Kedah, with Selangor also recording a notable increase in cases.

A new cluster named Tembok cluster later emerged on 30th September following the death of a 46-year-old man who had worked at a prison in Alor Setar, Kedah.

A Covid-19 test after his death found the man to have been infected with the virus. Since then, the cluster recorded 1,334 cases, which at the time made up 96% of the total cases in the state.

Initially most of the new cases were contained within Sabah. However, following state elections there, new cases popped up across the country.

The Health Ministry reported that every 72 hours at least one new case was discovered in each state nationwide. The data showed that many of the cases detected in the previously green zone states had originated from Sabah.

Malaysia’s youngest Covid-19 death was a one-year-old girl from Sabah who died on 5th October 2020.

She was brought to the emergency department of Hospital Semporna on 1st October but her condition deteriorated and she needed breathing assistance. A test later confirmed she was Covid-19 positive.

That same day Malaysia also recorded 432 new cases, the highest daily increase since the pandemic hit the country. Kedah and Sabah recorded the highest number of new cases that day with 241 and 130 infections respectively.

Six Covid-19 patients died, the highest death toll in a day since 29 March when 8 patients succumbed to the virus. All deaths were from Sabah and half of them suffered from comorbidities.

Covid-19 cases in Sabah continue rising and soon the entire state gets classified as a red zone. New records for highest daily cases continue to be made throughout the month, from 432 new cases on 5 Oct to a spike of 1,240 new cases on 26 October.

The Duchess of Kent Hospital (HDOK) in Sandakan, Sabah also worryingly revealed that some of their Covid-19 patients in Intensive Care Unit (ICU) are young with no history of chronic illness.

A total of 140 Covid-19 are also linked to several shopping malls in Klang Valley in October alone as the nation is hit by a third wave of infections.

By the end of October, Malaysia had 99 active clusters.

A one-year-old boy in Sabah becomes the second child to die of Covid-19 in Malaysia.

He also suffered from a hole in the heart, Downs syndrome and hypothyrodism.

With 453 new cases on 12 November, the increase in Covid-19 cases in Klang Valley surpassed Sabah which saw 319 new cases.

Malaysia made a deadly record with 12 deaths due to Covid-19. Tragically, the death toll also included a 14-year-old boy in Sabah who suffered from hydrocephalus and tuberculous meningitis. All of the deaths reported were from Sabah.

The Teratai cluster contributed the largest number of new positive cases on 23 November, with 1,067 out of 1,884 positive cases nationwide, a record high in Malaysia.

This cluster originated from Top Glove Corp Bhd’s worker dormitories in Meru, Klang, but spread beyond the factory worker’s circle, infecting individuals aged between two and 68.

The high number of new cases in Negeri Sembilan was attributed to cases detected within prison clusters, particularly the Bakti Cluster which involves a prison in Seremban. The index case of the Bakti Cluster (Case 54,624) was an inmate who tested positive on 22 November during an entry screening in the prison.

An elderly male in Sabah was brought into Hospital Tuaran already dead with his family claiming that he is 130 years old. This would make him the oldest person in the world, as well as the oldest person to die from Covid-19.

His age could not be independently verified as he did not have any identifying documents. The man was not Malaysian and believed to be stateless.

According to his family he actually died on 3rd November, but the death was only announced by the Health Ministry on 30th November.

Malaysia recorded 2,234 daily Covid-19 cases on 10 December, breaking past 2,000 cases for the first time since January.

Selangor recorded the highest number of new cases with 1,428 cases – most of which were from Seruling Cluster and Hentian Cluster. Sabah came in second with 274 new cases, followed by Perak with 115 cases.

This record was broken quickly on 26 December with 2,335 new cases.

Daily Covid-19 cases shot up to 2,525 to reach a new record high. Days before, 2,335 new cases were reported a day after Christmas.

The B117 Covid-19 strain, known as the UK strain, makes its way to Malaysian shores. It was detected in a Malaysian who travelled to the UK in December and tested positive on 28 December. The Health DG affirms that the strain has not spread within the country.

Malaysia’s Covid-19 numbers continue to climb as daily cases shoot past the 3k and 4k mark with the highest daily increase in cases recorded at 4,275 on 23 January.

22nd January also became the nation’s deadliest Covid-19 day with 18 more lives lost to the virus, raising the total number of deaths to 660.

Several cabinet members and politicians had also tested positive for the virus while the Health-Director General admits that MOH is at its breaking point.

Where we are today

Sadly, Malaysia also lost 678 lives to the virus, with the victims including children, teenagers, young adults and the elderly.

Health director-general Tan Sri Dr Noor Hisham Abdullah also revealed that a total of 71 deaths were recorded within the first 9 days of 2021, compared to less than 100 fatalities recorded during the first nine months of 2020.

With 41,667 active infections in the country one year after the first reported case and 5,000 daily new cases projected on the third week of February, it looks like things won’t be slowing down anytime soon.