The young keropok seller began tearing up at the stanger’s kind gesture. 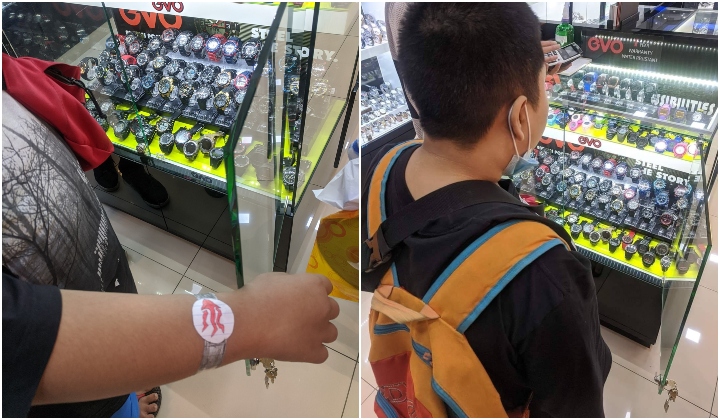 Despite the ugliness of the world events happening around us, kind Malaysians help shine a light to make it a better place – like this Malaysian man who bought a watch for a young keropok seller after he noticed the young boy wearing a paper watch on his wrist.

As an avid watch enthusiast himself, Bob noticed that the young street vendor was wearing a piece of paper cut into the shape of a watch on his wrist.

The young boy told him that he always had an interest in watches, so he decided to make his own since he couldn’t afford one.

Overcome by emotion, the kind man immediately brought the young man to a nearby shop and offered to buy him a real watch of his own to wear.

I told the boy to pick any watch he wants, I’ll pay for it. He couldn’t believe it and kept offering keropok to me as compensation because he couldn’t afford to pay. But I told him it was okay, just pay me back with your prayers and well wishes.

According to Bob, the boy’s uncle also began tearing up when the boy put on the watch and they kept asking ‘Are you sure you want to do this?’ When Bob said yes, the boy began tearing up as well.

I suddenly began crying, too. I haven’t felt this sad in a long time.

When asked by netizens on why he felt moved to give the child a gift, Bob explained in a separate post that he knew what the young boy felt and related to his interest for watches. He never expected for his post to go viral, but was grateful for the well-wishes that came his way.