“I love the spirit in here. We are in this together.” 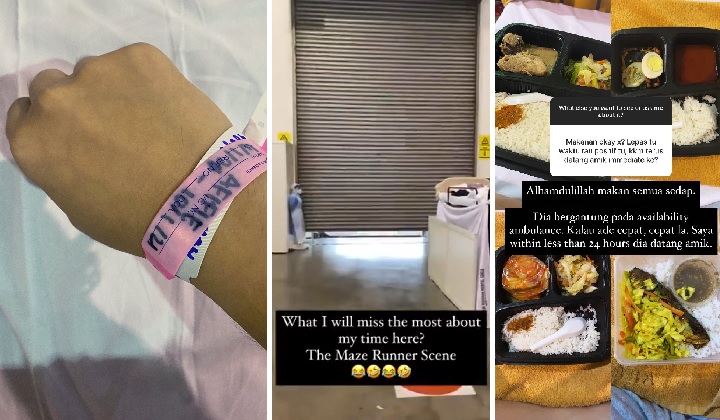 With the increasing number of Covid-19 cases being reported in Malaysia, many are fearful, not of the contracting the virus, but of being quarantined at the Malaysia Agro Exposition Park Serdang (MAEPS) Quarantine Centre.

However, a Twitter user under the handle AfifieChan has shared in a thread his experience of being in the centre itself which he says isn’t as bad as some are making it out to be.

AfifieChan said the thread was originally a Q&A on his Instagram account after he was admitted on 7 January 2021.

Here is a thread of Q&A on my Instagram about my quarantine experience in MAEPS, Serdang starting from 7th January 2021. Hope to spread some positivity and show the real situation. pic.twitter.com/cfbVdrt2D3

When asked if the centre was as scary as it looked, AfifieChan said it wasn’t scary at all. Instead, he described it as comfortable and clean, and the sheets hanging off beds were to block out the lights which were on 24 hours a day.

Regarding toilets, he said there were 6 washrooms, each having 4 to 6 cubicles, and that so far he had never had to queue or wait to use them. Furthermore, the toilets and showers were clean, well-maintained, and comfortable, even if they weren’t “hotel toilets”.

Regarding the food, AfifieChan replied that delicious meals were served 3 times a day (by Civil Defence Force personnel in full personal protective equipment) and some helpful patients would lend a hand in distributing the food.

Even patients help serve the food. Because there aren’t many staff and there are thousands of us. I love the spirit in here. We are in this together.

Food! Served 3 times daily and so far the taste is not bad. Sedap!😋 pic.twitter.com/9GUxulfSBk

AfifieChan said that patients in MAEPs were confirmed positive, asymptomatic and low risk, adding that from what he understood, they were no longer able to infect each other and thus could share facilities.

He added that foreigners and locals were housed in separate halls to make it easier for registration, observation, and announcements. For example, in his hall, the announcements are made in Bahasa Malaysia and are pretty funny.

He shared a clip of a nurse named “Syima” who he said was cool and cheered up the hall with her announcements.

In the above clip, Syima the nurse can be heard speaking in the third person and asking everyone to sit on their respective beds, to which a chorus of voices loudly reply “Yes, Mah”.

On the climate within the hall, AfifieChan said it was fully air-conditioned and very comfortable.

In response to some asking how he charged his devices, AfifieChan said there were charging stations all around the hall, and while it was important to always be vigilant, so far people were comfortable leaving their phones to charge unattended and there were no cases of thefts reported.

But the thing he said he would actually miss the most about staying in MAEPS was the entrance. Showing a clip of a rolling shutter, AfifieChan said that as they entered, new patients would be cheered by those already inside in order to raise their spirits and rid them of any fears.

Yesterday (8 January 2021) Malaysia just saw the highest number of deaths in one day (16) due to the virus so far. The number of new cases continues to rise and is expected to keep on rising.

Please stay home unless it is absolutely necessary to go out, always be diligent in fighting the virus and following the SOPs, inform the authorities and medical personnel if you have been exposed to the virus and together, we can win the fight against the virus.