Dr Mahathir pretty much told NATO to step up or shut up. 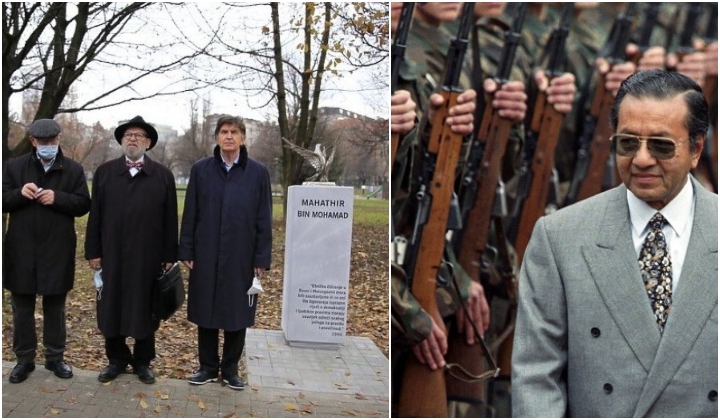 A monument dedicated to former Prime Minister Tun Dr Mahathir Mohamed was just revealed in the Balkan nation of Bosnia and Herzegovina.

According to a local news site Dnevni avaz, the monument at Kemal Monteno Park in the capital city of Saravejo honours Dr Mahathir and Malaysia for providing “exceptional assistance and support in the most difficult days for Bosnia and Herzegovina, as well as in the later period of reconstruction and recovery.”

The grey sculpture by academic sculptor Enes Sivac featured the last line from Dr Mahathir’s speech at the International Conference Of Parliamentarians On Bosnia-Herzegovina hosted by Malaysia in Kuala Lumpur.

Ethnic cleansing of Bosnia-Herzegovina must be stopped or forever must those who mouth platitudes about democracy and human rights cease and desist from their pretense at righteousness.

Monument of gratitude for Tun Mahathir @chedetofficial, former Prime Minister of Malaysia, unveiled in Alipašina Street. Led by Mahathir, Malaysia has provided exceptional assistance and support in the most difficult days for Bosnia and Herzegovina. pic.twitter.com/aHZphYOWB4

After the fall of the Soviet Union in 1991, a complicated bout of violence began in the Balkans as they fought to establish new, independent states.

Of these armed conflicts, the Bosnian Wars (1992- 1995) were the bloodiest ones seen in Europe since the end of World War 2.

The country faced a war with Serbia just after Bosnia announced her independence in February 1992, through United Nation’s recognition. The Serbian Republic of Bosnia and Herzegovina, proclaimed that Bosnia had declared independence from Yugoslavia against the wishes of its Serbian population. Therefore, it should not be recognised internationally.

Major violence broke out between three ethnic groups: the Bosniaks (Muslim), the Serbs (Orthodox) and the Croats (Catholic) – and things escalated to ethnic cleansing and systematic mass rape, with most of the victims being Bosnian Muslims.

At first, Malaysia did not pay serious attention to the Bosnia-Herzegovina conflict as the belief was that the UN and Western powers, especially America, were capable of restoring peace and justice. This is largely due to these states’ conviction of human rights and democracy.

However, global allies and a general lack of commitment from Western nations to deploy military operations at Bosnia and Herzegovina frustrated Dr Mahathir who later wrote in his 2011 memoir:

What the Serbs did was unimaginably cruel but what the Europeans did was equally appalling. European countries that make up NATO like to lecture us about human rights but their inconsistency is shameful… If a dog gets stuck in a drain, they spend time and money to rescue it… Yet they refused to help innocent people who were being killed.

Things took a turn for the worse in 1993 when the Croats also launched attacks on the Muslims in Bosnia who had no weapons to fight back with due to an arms embargo placed by the UN in 1991. The Serbs, however, were armed with modern weapons which they acquired from the Yugoslav National Army.

With the worsening violence and massacre of the Bosniaks, Malaysia took a stand and officially recognised Bosnia and Herzegovina, Croatia and Slovenia as independent nations in May 1992.

The Malaysian government also welcomed Bosniaks stranded in Croatia with a visa-free entry for the refugees in 1993.

Mahathir’s then deputy and finance minister, Datuk Seri Anwar Ibrahim also played a crucial role in advocating for Bosnia on the international stage.

In 1993, Malaysia pressured the Organisation of Islamic Cooperation (OIC) to band together for a solution, which led to an agreement on Bosnia’s need for weapons for defence from the Serbs. Dr Mahathir also pushed for the OIC to support the plan to allow Malaysianan troops stationed in Bosnia to conduct both peacekeeping and war missions.

Malaysia then dispatched armed forces attached to a UN mission on 1 October 1993, under the command of Major General Datuk Md Hashim Hussein. This team was known as Malbatt I and had 996 members.

Malbatt’s responsibility was to prevent the escalation of the war situation, prevent people from starving, provide medical assistance to the ill and be prepared to face armed conflicts even if they were not involved in military operation.

Malaysia had also lobbied the UN, through ‘the Contact Group’ (small countries among the OIC members) by actively maintaining relationships and negotiations with the UN so that they could continue to pressure and ensure that all the Muslim countries’ views were taken into account by the UN.

Malaysia acting as an OIC representative had also sent hard messages calling for the resignation of the then Secretary-General, Boutros Boutros-Ghali, for his failure to solve Bosnian’s conflict.

With all the international pressure, Bosnia was finally released from the horrors of a war that was eventually ended in December 1995 with the signing of the Dayton Agreement.

Though many events took place to end the war, Malaysia – and Dr Mahathir- is always remembered as Bosnia’s fiercest advocate.