Residents, known as F*ckingers, have had enough of visitors and their bad jokes 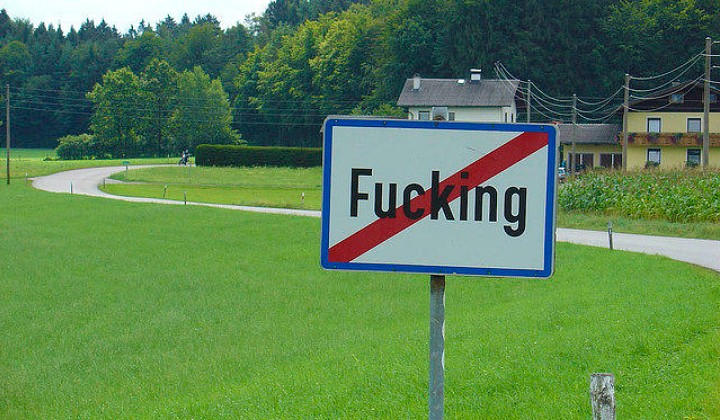 Though it’s just a tiny village in Austria, Fucking is probably one of the most recognised spots in the English-speaking world due to, uh, an unfortunate similarity to a curse word, or the crude shorthand for copulation.

Well, it looks like fun is over as The Guardian reports that the Fuckingers – yes, that’s what they’re really known as – are Fucking sick of it. The village will ring in a new name in 2021 – Fugging.

According to The Guardian, the decision was made after years of being the butt of jokes, especially their signposts, on social media became too much to bear.

“I can confirm that the village is being renamed,” said Andrea Holzner, the mayor of Tarsdorf, the municipality to which the village belongs to the regional daily Oberösterreichische Nachrichten (OOeN).

Austrian daily Die Presse reports that the villagers “have had enough of visitors and their bad jokes”.

Over the years, numerous tourists have dropped by the sleepy village to snap pictures by signposts, some with suggestive poses. Others have stolen the signposts, which led to local authorities using theft-resistant concrete to anchor in new signposts.

Increasing numbers of English-speaking tourists have made a point of stopping in to snap pictures of themselves by the signpost at the entrance to the village, some even go as far as to record themselves engaged in sexual acts in front of the signs as well.

The problem got so bad that the village of 100 people had begun pushing for a name change years prior, but a former mayor was reportedly stubborn in keeping the name as it had existed for 800 years with no problems. He also was also quoted stating:

Everyone here knows what it means in English, but for us Fucking is Fucking—and it’s going to stay Fucking.

How Fucking came into existence

Atlas Obscura explains that Fucking first became the subject of jokes when American soldiers discovered the village during World War 2 in the 1940s.

But despite the sexual connotations, the name itself comes after the medieval Baron Focko and the village was initially called Fukching and Fugkhing before settling on Fucking in the 1700s.

But it looks like social media and really bad tourists have finally killed the Fucking name.