Sheikh Khuzaifah Bawazeer says it was never about the Budget. 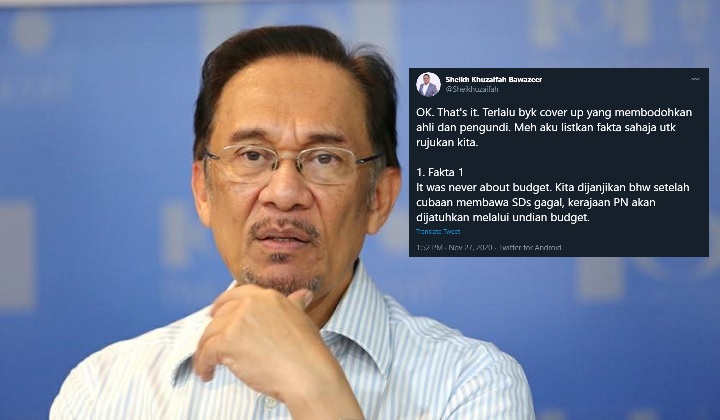 Amanah Bukit Bintang Youth Chief Sheikh Khuzaifah Bawazeer has spilled the tea on Twitter regarding what happened yesterday within PH, saying the many cover ups had made fools out of party members and voters.

He listed out 6 facts, verified by a Youth member of another PH component party, which contradicts the statement made by Opposition Leader Datuk Seri Anwar Ibrahim after the Budget 2021 vote which proved disastrous for the Opposition.

Anwar had said that the Opposition did not want to oppose the budget because there were some parts of it that they agreed with and would instead spend the next two weeks fighting it at the Committee level.

“Fact 1: This was never about the budget. We were promised that after the attempt to present the SDs (Statutory Declarations) had failed, the PN government would be toppled through the budget vote,” wrote Sheikh Khuzaifah.

His next fact was that this was because if PH Plus took over, they would table their own budget.

So the question of accepting some, rejecting aid for the rakyat, and others did not arise at all. THE NEW GOVERNMENT WOULD TABLE A NEW BUDGET.

Next, Sheij Khuzaifah said that in a meeting on November 24th, it was unanimously agreed that they would reject the budget as a show of no confidence against the PN government.

PH was promised that the numbers in the letters given to the YDPA (Yang diPertuan Agong) were still valid. Still strong, formidable and convincing.

Fact 4 was that Anwar told the MPs not to support a bloc vote after Datuk Mahfuz Omar (Pokok Sena-Amanah) had called for it.

“Kota Raja (Mohamad Sabu) and Pulai (Datuk Seri Salahuddin Ayub) had already stood up but were forced to sit back down. Other AMANAH MPs could not be stopped from standing.

“Kota Raja and Pulai threw a fit in the PH meeting afterwards. The Opposition Leader had again thrown his friends under the bus. The same as when he decided to negotiate with the group of pirates,” he wrote, possibly referring to former Prime Minister Datuk Seri Najib Razak’s camp.

He (Anwar) can only say, “Don’t worry. I have the SDs. (Prime Minister Tan Sri Muhyiddin Yassin) is finished.”

Furthermore, Sheikh Khuzaifah claims that after Anwar could not give a satisfactory explanation, he agreed that if the PN government could not be toppled within 7 days, he would resign as PH chairman and Opposition leader.

This we must hold on to and demand.

Finally, Sheikh Khuzaifah said that after they had agreed to wait 7 days, the discussion turned to how to explain this to party members and the narative that was agreed upon was to only reject part of the budget, fight at the committee level, and not reject policies for the rakyat.