He also said that Pakatan would’ve stayed in power if they’ve supported him instead of Anwar. 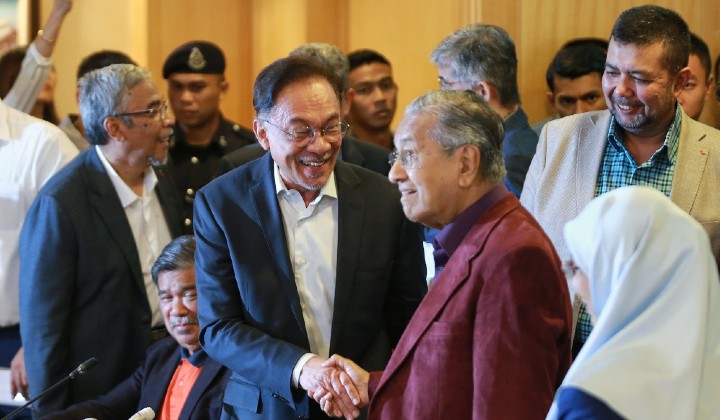 In a blog post, Mahathir said that although it is true that previously he was instrumental in denying Anwar the position, the nonagenarian said that he was ready to hand over the post to the opposition leader once he had stepped down.

It is true that I used to think that for some reason he was disqualified from being the Prime Minister of Malaysia. But when Najib became a kleptocrat, I was willing to work with Anwar to bring down Najib. I do not oppose the Pakatan Harapan (PH) proposal that Anwar will replace me when I resign. But it is not yet time, but Anwar’s allies have demanded that I resign.

On the same post, he also told about how the current Prime Minister Tan Sri Muhyiddin plotted his move to become his successor.

On 21st February, 2020, I was told by Muhyiddin and several Bersatu leaders that on that night the Pakatan Harapan Presidential Council Meeting would urge me to resign for Anwar to be appointed Prime Minister. It is said that I will be forced to appoint Anwar as Deputy Prime Minister immediately.

Mahathir said that Muhyiddin’s goal was for Bersatu to leave Pakatan Harapan to overthrow the previous government and added that Datuk Seri Azmin Ali and Datuk Seri Hamzah Zainuddin also worked together to form the new government.

This was evident, he said, when the party heeded to Muhyiddin’s call to leave rather than to stay as recommended by Mahathir.

Long story short, the Majlis rejected my recommendation and agreed Bersatu to leave Pakatan Harapan immediately. Some even pounded on the table and loudly supported Muhyiddin to get out of PH.

Mahathir said that it was during this time when Muhyiddin teamed up with UMNO and PAS to form Muafakat Nasional, a party which he said he wasn’t too keen on leading.

However, he said, Muhyiddin wouldn’t have been in power if Pakatan supported him instead of Anwar.

He also stated that Anwar can’t become Malaysia’s Prime Minister as he still refuses to cooperate with Mahathir.

But we all know that Anwar still cannot be the Prime Minister. Anwar’s statement that he had enough to say was found to be untrue. In Anwar’s planning I have no place. It is clear that putting me aside, Anwar did not win. In 2008, Anwar failed. Am I also the one who stopped him.