14 seconds may not seem a lot of time, but it makes all the difference between life and death. 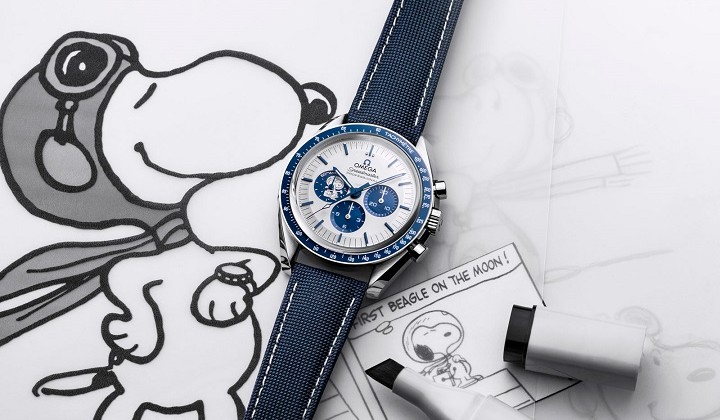 Looking at the Swiss timepiece crafted especially for astronauts, you’d probably exclaim in surprise at the sight of a cartoon dog on the chronograph watch.

No, your eyes aren’t playing tricks on you. Yes, that is indeed Snoopy proudly displayed on an Omega watch.

Strange as it may sound, the beloved cartoon character has been a beacon of NASA’s Space Program since the 1960s!

The beagle has landed

Despite merely being a 2D drawing in a comic panel, there was something to be said of the starry-eyed cartoon dog with his head in the clouds. So when NASA’s mission to the moon became a serious reality by 1968, the lovable Snoopy was the obvious choice to be the face of its safety programme.

Not only would he act as a safety “watchdog”, but Snoopy represented total mission success while also keeping things light in serious situations – a trait that would come into vital play in the near-disaster that was the Apollo 13 mission in 1970, but more on that later.

Needless to say, Snoopy was an instant hit among the astronauts and employees of the space agency.

In May 1969, when Apollo 10 astronauts traveled to the moon for a final checkout before attempting lunar landings on later missions, Snoopy was at the forefront of their minds. As this particular mission required the lunar module to skim the moon’s surface and “snoop around” for the perfect landing site, the crew named the lunar module Snoopy! The command module was named Charlie Brown, after Snoopy’s loyal owner.

NASA also gives out the prestigious Silver Snoopy Award to employees and contractors for outstanding achievements related to human flight safety or mission success. Designed by Charles M. Schulz, the Silver Snoopy Award depicts the beagle in a spacesuit and wearing his famous Flying Ace scarf.

Receiving the Silver Snoopy Award is regarded as a high honor for outstanding performance and it has been given to no more than 1% of eligible recipients since 1968!

How Snoopy & a watch saved NASA from a space disaster

Just as Snoopy has been a proud partner of NASA since the inception of its Apollo space programme, so has the Swiss luxury watchmaker Omega.

Following a series of aggressive tests, performed by NASA engineer James Ragan from late 1964 to early 1965, the Omega Speedmaster Professional chronograph was declared operational for space exploration and flight certification.

It was this very timepiece that became the first watch worn on the Moon, ticking away precisely on the wrist of astronaut Buzz Aldrin in July 1969.

The watch was a critical backup. If the astronauts ever lost the capability of talking to the ground, or the capability of their digital timers, the only thing they would have to rely on would be the watches on their wrists. It needed to be there for them if they had a problem.

As it turns out, this critical function came into play at the near disaster that was the Apollo 13 lunar mission in 1970.

Apollo 13 was supposed to be the next successful chapter of the Apollo project, being the third ever human lunar landing.

The three-person crew, commanded by veteran astronaut James Lovell together with Command Module Pilot Jack Swigert, and Lunar Module Pilot, Fred Haise, were on a mission to conduct a series of tests in an area of the Moon named the Fra Mauro formation.

But they never made it to the moon.

“Houston, we have a problem”

Around 5 minutes after liftoff, John Swigert, Fred Haise and James Lovell felt a little vibration. Then, the center engine of the S-II stage shut down two minutes early and this caused the remaining four engines to burn 34 seconds longer than planned – but all still seemed well.

Two days into space, as the crew finished a 49-minute TV broadcast showing how comfortably they lived and worked in weightlessness.

Lovell said, “This is the crew of Apollo 13 wishing everybody there a nice evening, and we’re just about ready to close out our inspection of Aquarius and get back for a pleasant evening in Odyssey. Good night.”

Houston, we’ve had a problem here.

The command module’s normal supply of electricity, light and water was lost, and they were about 200,000 miles from Earth.

One of the big questions was, “How to get back safely to Earth?”

Before the explosion, Apollo 13 had made the normal midcourse correction, which took it out of a free-return-to-Earth trajectory and put it on a lunar landing course. The crew also had to scramble into the lunar module to survive, abandoning the damaged service module.

Unfortunately, the lunar module navigation system wasn’t designed to help in this situation. This craft was not built to support so many people for such a long time and so, nearly all power was shut off to conserve energy.

With their digital timers obsolete, the astronauts were at the mercy of dark and freezing conditions.

But there was one saving grace; they were each equipped with Omega Speedmaster Professional chronographs – part of NASA’s official kit for all manned missions since 1965.

Because the mission had drifted off course by roughly 60 to 80 nautical miles, it meant that the module would re-enter Earth’s atmosphere at the wrong angle, and bounce back into space with no chance of recovery.

To manually readjust the course of the craft, an exact 14-second burn of fuel was required. There was simply no room for error.

Without their digital timers, Swigert depended entirely on his Omega Speedmaster chronograph to time the burn, while Lovell piloted the craft using the Earth’s horizon as his guide.

We used the Omega watch that Jack had on his wrist and I had to control the spacecraft. Jack timed the burn on the engine to make that correction to get us back home safely. Quite simply, Omega was an essential part to a successful mission.

And it worked. Exactly 142 hours and 54 minutes after launch, Apollo 13 splashed down safely in the South Pacific Ocean. The crew had timed everything perfectly.

For its critical, life-saving precision, Omega was bestowed with the esteemed Silver Snoopy Award in 1970 – and Snoopy found himself a new timepiece!

Now lovingly known as the Moonwatch, the Omega Speedmaster is a serious icon amongst professionals and enthusiasts in space exploration.

To celebrate half a century of greatness with NASA, the Omega Speedmaster “Silver Snoopy Award” 50th Anniversary is here, inspired by the first Speedmaster watch worn on the moon in 1969!

The blue and white timepiece prominently features “Snoopy the Astronaut” spacewalking in the 9 o’clock subdial while the caseback depicts Snoopy in a spacecraft exploring the far side of the moon- just like Apollo mission!

An Earth disc rotates once per minute, in sync with the watch’s small seconds hand and the iconic quote “Eyes on the Stars” is etched into the black universe.

What’s even more fascinating, when the chronograph seconds hand is activated, Snoopy moves behind the moon embossed on the sapphire crystal.

Of course, the moonwatch’s legendary precision is here to stay with the 42 mm stainless steel case housing the Omega Co-Axial Master Chronometer Calibre 3861 – which is certified as a Master Chronometer from the Swiss Federal Institute of Metrology (METAS).

The Moonwatch is – without the shadow of a doubt – the quintessential “big boy’s toy” and we’re already mooning over it!

Source: NASA and Peanuts Celebrate Apollo 10’s 50th Anniversary Apollo 13 In-Depth How Snoopy Found his Way onto an Omega Speedmaster, and its Role in the Apollo 13 Incident