Apparently, OLDTOWN White Coffee has a lot of loyal fans. 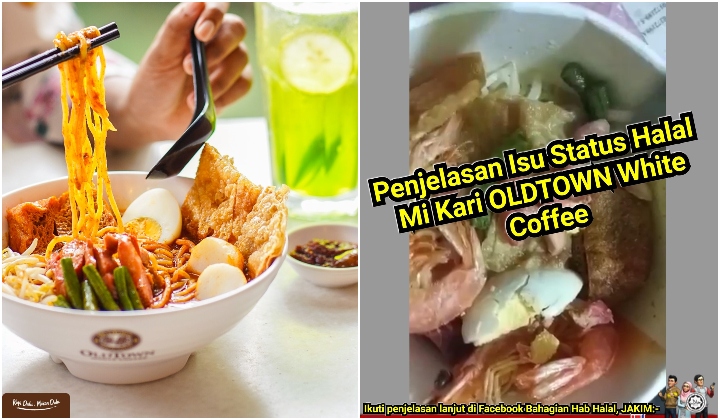 Food and beverage companies in Malaysia are no strangers to accusations of being non-halal. Starbucks Malaysia, for one, gets accused on almost a yearly basis.

Malaysia’s latest victim is the popular Kopitiam franchise, OLDTOWN White Coffee, who was accused of using pork meat in their curry noodle dish.

In a video spread via WhatsApp, the irresponsible netizen warned Muslim Malays against eating curry noodles at the Kopitiam, claiming that the meat used was pork.

Fortunately, some sharp netizens called out the video as being fake news, highlighting that the meat used in the noodle dish was actually marinated chicken, adding that the pink colouring of the meat was due to the ingredients used in the marinade.

There were also those who pointed out that chicken and pork meat are easily distinguishable due to their differing textures.

For those who are unfamiliar with the Kopitiam, OLDTOWN White Coffee uses BBQ marinated chicken in their curry mee, a common ingredient that can be found in several dishes on their menu. Including their BBQ Chicken Dry Curry Egg Noodles and BBQ Chicken Soup Egg Noodles.

Regardless, the accusatory video went viral and resulted in officers from the Ministry of Domestic Trade and Consumer Affairs visiting the restaurant to investigate the claims.

The Ministry shared news of their investigation via Twitter, adding that initial findings revealed that not only does the restaurant have a valid halal certification from the Department of Islamic Development (JAKIM), even BBQ Chicken used in the dish was based on raw ingredients that have halal certification.

They also sampled a piece of the meat from the premises for further testing.

Since then, OLDTOWN White Coffee has also issued a statement over the incident, assuring their customers that the company takes halal certification and regulations very seriously to ensure their products are free from any non-halal elements.

OLDTOWN White Coffee strongly rejects all rumours and claims that our products contain pork. The allegations in the video that has been circulated on various social media channels is not true.

They added that JAKIM has released a statement to verify that the claims made were false and that the Kopitiam’s halal certificates can be found online at Portal Rasmi Halal Malaysia.

We urge and seek the help of netizens to stop the spread of these false claims. We are seeking legal advice and will not hesitate to act against individuals who make false allegations to the fullest extent of the law.

For more stories of people accusing innocent food and beverage operators of lying about their “non-halal” products, you can check out our articles at the links below.