No one expected any of this – at all! 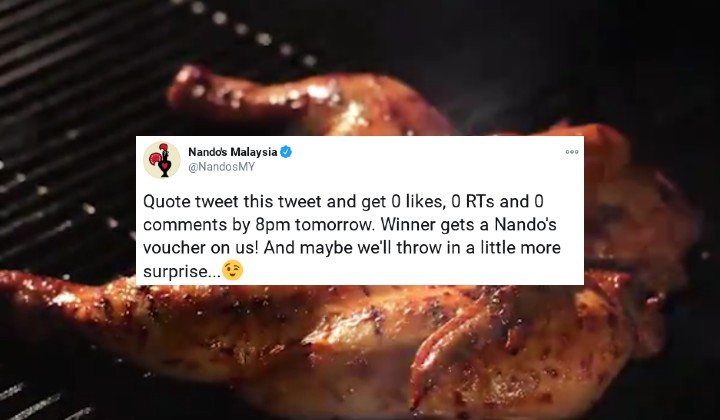 Nando’s Malaysia is well known for pulling power moves, such as their latest Tweet which promised free vouchers for Twitter users if they didn’t get any engagement.

Quote tweet this tweet and get 0 likes, 0 RTs and 0 comments by 8pm tomorrow. Winner gets a Nando’s voucher on us! And maybe we’ll throw in a little more surprise…😉 pic.twitter.com/v93PX3cRkr

While Malaysians naturally did their best to get some free vouchers, an unexpected group of netizens entered the conversation as well.

People started to notice that South Africans were getting involved, united for a singular reason… to make sure Malaysians don’t win.

We’re just here to make sure that no Malaysian win pic.twitter.com/i0AR67Fnez

People who were usually speaking to nothingness on social media found themselves with over thousands of likes and retweets, just to make sure that they didn’t win anything.

A few South African Twitter users even posted videos of themselves liking EVERY SINGLE retweet so NO ONE could win!

On my way to “like” and “retweed” people’s tweets, even though I’m not from Malaysia. pic.twitter.com/SXTc3VLFet

A surprising Tweet from a supposedly South African Twitter account reads in flawless BM, stating that South Africans are salty because the chicken served at Nando’s South Africa are smaller in size than the ones served in Malaysia!

There’s only one sure winner in this game: Nando’s, who at the time of writing has over 73,600 quote retweets, and it doesn’t look like they will even need to give out any free vouchers this time either.