There’s hopes that Jogho can put Bachok on the map as the ‘hub’ of lembu sado in the state. 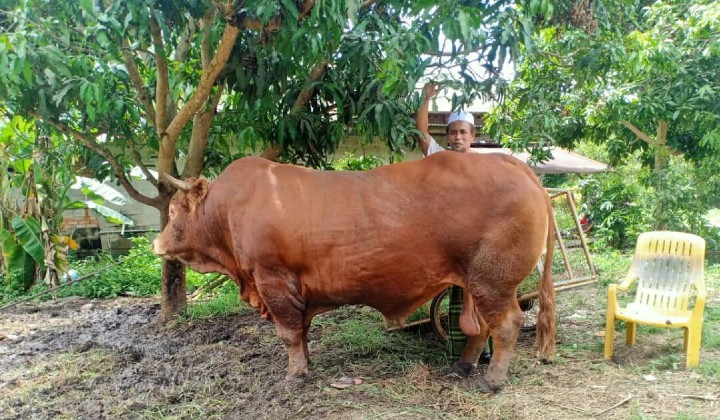 A massive and muscular bovine by the name of Jogho from Kelantan will be the Asian representative for an international bull competition as it will compete in the “Limousin – Champion of the World” Competition which will take place in December.

The 1.6 tonne, RM25,000 bull will battle it out against other Limousin cattle from around the world such as France, New Zealand and Africa.

The Limousin breed originated in the West of the Massif Central between Central and South West France with mature Limousin females averaging 650 kgs while mature males can reach up to 1,000 kilos.

Its owner, Zulkifli Yaakob, 51, said to Sinar Harian that he didn’t expect the bull that he had reared for 2 years would be chosen to represent Malaysia and the Asian continent.

Alhamdulillah, winning or losing is another story. Jogho was selected by the Veterinary Services Department after the relevant parties conducted a screening throughout the state to find the best lembu sado.

The lembu sado craze came about when cattle were seen more as pets than livestock and as the value of the breeds can reach tens of thousands of ringgit, cattle breeding became a stable job for some living in villages.

The criteria to be selected, he said, are based on body structure, height, length, beauty and so on.

Zulkifli, who is a teacher of Sekolah Kebangsaan (SK) Pak Pura said that the competition organized in France gives an opportunity to all Limousin owners to showcase their cattle.

He also hopes that Jogho can put Bachok on the map as the ‘hub’ of lembu sado in the state.

Caring for Jogho is not difficult, you just have to feed it twice a day with bran and grass besides bathing it once a week

Jogho is one of the 12 cows that Zulkifli has bred for the past 10 years and apart from the Limousin, he also rears cattle from Bali (Indonesia) and the Charolais breed, among others.

He said it’s a hobby that he enjoys doing after he’s finished his day job.