Covid cancelled everything this year. 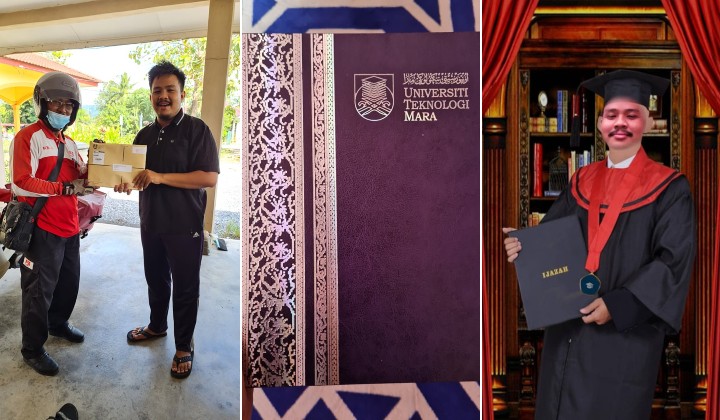 Graduating from college or university can be considered one of life’s challenging milestones that many still cherish in their memories, or dream in hopes of one day tossing that tassel-cap, up in the air.

But with the threat of the Covid-19 pandemic still looming, it seems that the Class of 2020 is forced to make do with celebrating their final transition into adulthood by more unconventional means.

Speaking to TRP, Muaz explained that the particular scene came about as his degree was delivered by a motorcycled postman while he was having breakfast at home in Kangar, Perlis.

Wanting to capture the moment, Muaz quickly got his mother to snap a picture of the two of them together.

Muaz told TRP that despite having already made preparations for graduation, he had to set it all aside due to the pandemic when UiTM officially suspended its 92nd inaugural convocation ceremony across its nationwide campuses.

Instead of having to pick up his certificate in person, Muaz along with many other UiTM graduates had been prompted to receive their scrolls via snail mail.

Reportedly, over 20,000 of UiTM’s diploma and degree graduates would essentially be skipping out on this year’s convocation ceremonies.

It is understood that graduates can request for their certificates to be sent to them by post or choose to attend a restricted, by-appointment-only, award ceremony held at UiTM campuses between December 1, 2020, and March 10, 2021.