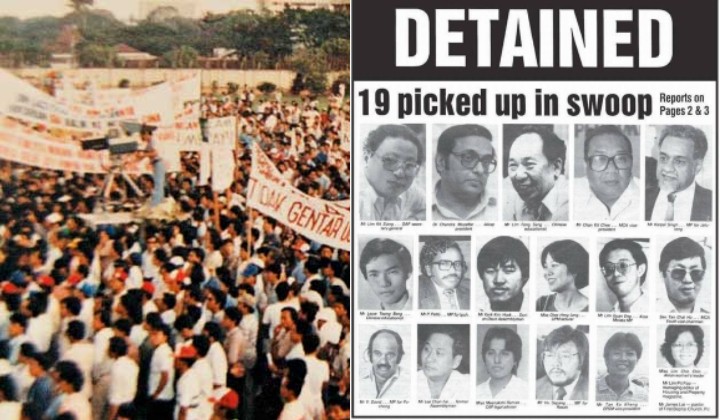 Ops Lalang has shaped Malaysia to what it is today, 33 years later, even though most of us don’t remember it- or even know of it.

After all, the operation was carried out amidst controversy and was never addressed in our Sejarah textbooks.

Not That Long Ago…

On 27 October 1987, the Internal Security Act (ISA) was invoked to arrest over 100 people without trial, including NGO activists, opposition politicians, students, media reporters, artists, and others.

Today,33 years of Ops lalang. I had the opportunity to lead the campaign under Gerakan Mansuhkan ISA (GMI).I learnt to understand the pain, fear&impact of ISA.I have witnessed how fear has been used as a tool to run the country.This should never repeat in any shape or form! pic.twitter.com/oEl9ptxB2w

While the official reason for this drastic operation carried out by the Malaysian Special Branch and the Royal Malaysian Police is to defuse racial tension, it is widely speculated that it was a method for then-Prime Minister Tun Dr Mahathir Mohamad to remove his political opponents.

The background context, however, sounds like the issues we still face today, such as: the conflict between the vernacular Chinese schools and the Ministry of Education, NGOs criticizing government policies, the challenges to the Malay bumiputra status, and fear of forced Islamization.

Freedom of press became significantly less free. While The Star, Sin Chew Jit Poh, and Watan regained their licenses and publication half a year later, newspapers began to self-censor their content over fears of ‘displeasing the government’.

Government ministries and politicians would advise newspapers on how issues should be approached or avoided. More liberal discourse or criticism of the government were averted.

The following year in 1988, Dr. Mahathir sacked the Supreme Court judges to public outcry in what is commonly termed as the “1988 Judicial Crisis“.

We are on the road to dictatorship. I cannot see any other way… This is no democracy.

Where We Are 33 Years Later

Three decades later, while things have improved considerably, that same fear of the government still lies as an undercurrent in Malaysian society.

While the ISA has since been repealed, it has been replaced by the Security Offences (Special Measures) Act 2012 (SOSMA), which has been criticized by human rights activist groups for being deeply flawed and draconian.

Still, freedom of press in Malaysia has returned gradually, especially since the 14th General Election in 2018.

However, many media companies often self-censor preemptively out of fear of government disapproval. Artists also face constant censorship in their political works, such as Zunar, whose Najib clown face earned him nine charges under the sedition act.

Ops Lalang is not taught in schools and there is little public discussion around it outside of human rights groups and analysis of political history. However, it may be time to learn from history so we don’t commit the same mistakes.