The uncle had apparently told a motorcyclist not to ride on a jogging path. 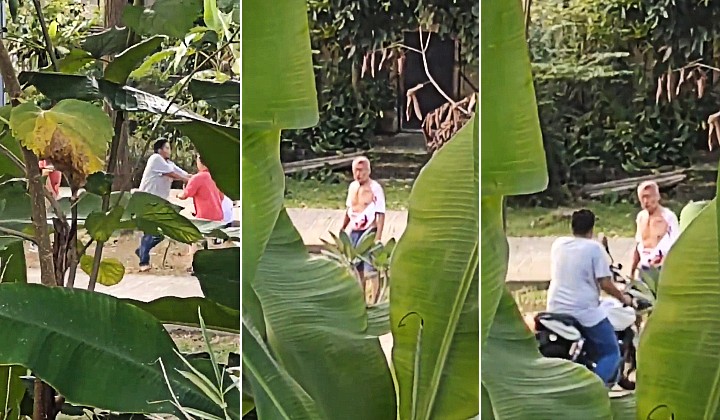 Malaysians are outraged by footage of an elderly man getting beaten up bloody while he was out on an evening jog.

In the clip, a large-built man in a grey shirt was seen attacking an elderly man wearing a white shirt and running shoes, in a fit of rage.

Raraa890 writes that the uncle met his attacker near her home in Taman Rekreasi Bandar Baru Sungai Buloh, Selangor, and had told the latter that vehicles weren’t allowed onto the pedestrian-only track.

It was then that the man supposedly began verbally and physically assaulting the uncle as three other uncles tried to stop the altercation.

The video showed the attacker swinging his fists at the uncle until the elderly man is left bleeding with his shirt torn off.

“Do you want to die”, screamed the man as he violently came at the uncle several times before tossing what appears to be a branch at his victim and finally riding off on his motorcycle.

Many concerned netizens couldn’t stand the violence that they had witnessed while others wanted to claim some retribution.

can you pls make a report to police & make a justice for the uncle. pls help him, video dah ada. whatever the reason, lelaki tu mesti dihukum.

However, providing more context and a bit of a plot twist to the video, Raraa890 revealed that the attacker may have been an individual suffering from some sort of mental illness and might also be holding onto a disabled persons (OKU) card.

Raraa890 told TRP that the man was probably a resident living in her neighbourhood, but could not confirm whether he was in fact an OKU.

She also had no further information on whether the incident had been reported to the police.