No matter how annoyed you are, you will still be held accountable for your actions. 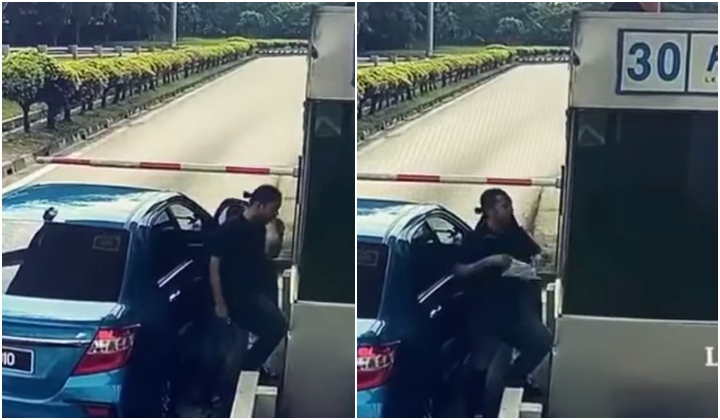 The man who was caught throwing his drink at a toll operator on the KESAS Highway in a CCTV video that has been making rounds online, has been arrested by the police.

According to a report by Berita Harian, Subang Jaya District Police Chief Assistant Commissioner Risikin Satiman said the suspect who is in his thirties had also threatened the victim.

The incident, which took place at 7am, began when the suspect drove his Perodua Bezza into lane 30 of the KESAS Highway toll plaza from Puchong heading towards USJ, Subang Jaya.

While in the lane, the suspect tried to top up his Touch ‘n Go card at the booth. However, the victim informed him that his card could only be topped up in lane 28 of the toll plaza. The suspect, following the victim’s instructions, then went to lane 28.

The man returned to lane 30 at 9.05am the same day and scolded the victim by saying ‘don’t mess with me’.

The suspect then threw the drink he was carrying at the victim and drove away in his Perodua Bezza, leaving the scene.

Elaborating further, Risikin said the traumatised victim then lodged a police report over the incident.

The case is now being investigated under Section 506 of the Malaysian Penal Code, which deals with punishment for criminal intimidation.

It states that whoever commits the offence of criminal intimidation shall be punished with imprisonment for a term which may extend to two years or with fine or with both.