57% of the cases were from the Tembok cluster in Kedah. 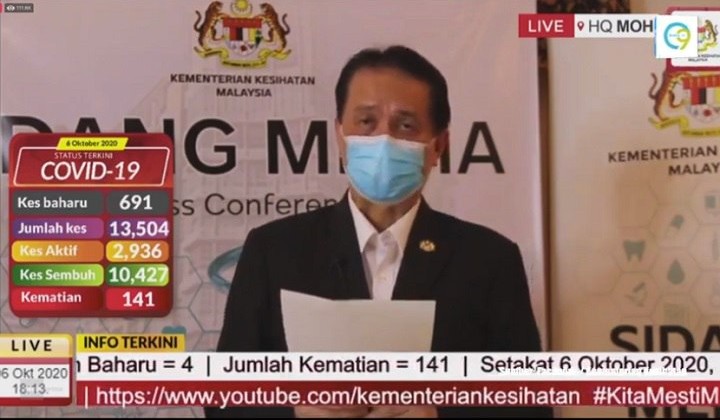 Of the total, 3 cases were imported while the other 688 were locally transmitted. From the total local transmissions, 27 individuals were non-Malaysian nationals.

This brings the cumulative number of cases in the country to 13,504 cases.

According to Dr Noor Hisham, out of the total new cases today, 57% of the cases (395 cases) were from the Tembok cluster in Kedah.

Despite this, he assured that the situation is still under control as the Tembok Cluster is an isolated and contained cluster that is separated from the rest of the community in the area.

Dr Noor Hisham said there are currently 31 individuals being treated in the ICU, with eight requiring ventilators.

Two new clusters have also been reported today. The first is Batu Cluster in Taiping Perak which has affected the staff and family members of a holding camp.

On 5 October, 7 individuals in this cluster tested positive and they are all receiving treatment at Hospital Raja Permaisuri Bainun.

Meanwhile, of the 860 individuals that were screened, 182 tested negative and the rest are still waiting for their results.

The second cluster is the Ramai Ramai Cluster in Sandakan, Sabah. The index patient has been identified as a bus driver who was suffering from a sore throat and fever.

On 3 October, he tested positive and has since been receiving treatment at Duchess of Kent Hospital. The source of his infection is still under investigation.

Close contact tracing discovered 19 more individuals who tested positive. All of whom are Malaysian nationals. They too have been sent to Duchess of Kent Hospital for treatment.

On 6 October, a total of 166 individuals in this cluster have been screened, with 148 individuals still waiting for their results.

Meanwhile, four more victims have perished from Covid-19, bringing the total number of deaths in Malaysia to 141 individuals (1.04%).

All four victims were Malaysians. Three of whom were adult males and one baby boy who was 1 years old.

The baby boy was reportedly admitted to Hospital Semporna on 1 October and placed on the ventilator. On 5 October he was screened for Covid-19 and tested positive for the virus.

Meanwhile, 87 individuals have made full recovery, bringing the total number of recovered Covid-19 patients in the country to 10,427 (77.2%)

The Director-General made the announcement via Facebook Live from his home, where he is currently serving a 14-day self-quarantine.

Dr. Noor Hisham Abdullah is under quarantine after being present at the same meeting which was attended by Religious Affairs Minister Datuk Dr. Zulkifli Mohamad Al-Bakri, who was recently confirmed positive for the virus.