As the saying goes, “one man’s trash, is another man’s treasure”. 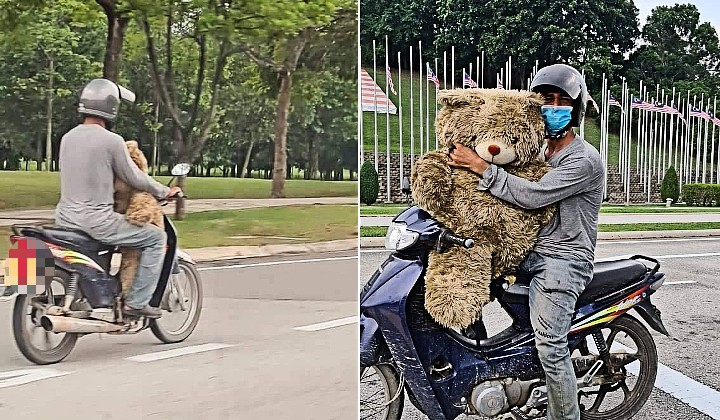 Netizens were a little teary-eyed by the somber story of a father, bringing home an old thrown-away teddy bear for his child to play with, going viral on social media.

Facebook user Azri Walter narrates his supposed encounter with a man who had salvaged the large stuffed teddy bear from the dumpster as a gift for his kid.

Azri claims that he had ran into the man at a traffic light on his way to work, somewhere along the route to Putrajaya.

Spotting a man with a peculiar passenger on his motorcycle, Azri had stopped his car next to him to strike up a conversation during a red light.

When asked where he was headed with the soiled stuffed toy, the man said that he had found the bear at a landfill while he was working.

During the quick exchange, the man revealed that his child had wanted a similar teddy bear after seeing one at a store. However, the toy was too expensive for the father to afford.

“Can buy a meal for the entire family”, said the man joyfully and explaining that with a little cleaning up, his kid would love the present that he had found.

Azri then went on to say how he was touched by the man’s struggles and determination which was echoed by other commenters online recognizing how a father’s love knows no bounds.

Toys are tools for growing minds

Though most parents (mine especially…) would tend to disagree, playtime plays an important role in a child’s learning and development.

Research has shown that playing with toys influences a child’s thinking, behavior, and understanding of the world around them, besides developing their imagination and dexterity and other life skills.

But as children grow up, parents might find their homes quickly overrun by unused toys and are more than happy to be rid of some of the clutter.

Instead of throwing toys that kids have outgrown into the trash, why not donate them instead?

In a 2019 report, the United Nations Children’s Fund (UNICEF) Malaysia, revealed that there are close to 2 million children living under poverty in the country.

Many of these children lack access to healthy foods, education, as well as the ability to own their own toys.

Organizations such as the Toy Libraries Malaysia (TLM) aim to bridge this joyless disconnect by providing underprivileged children with access to toys and a conducive environment for playing.

TLM sets up what’s called “toy libraries” in impoverished communities, serving as a safe space for children to play with often donated toys.

The non-governmental organization (NGO) takes donations of used, and even broken toys, to be repaired and enjoyed by those more of needing them.

Many NGOs in Malaysia such as the Salvation Army and others also take donations of preloved toys to be resold for charity funds or redistributed to kids in need.

So do check out your local community centers for more information on how you can turn old toys into tools to help grow the next generation of Malaysians.