Thankfully, two of his favourite ones had been vaccinated and managed to survive. 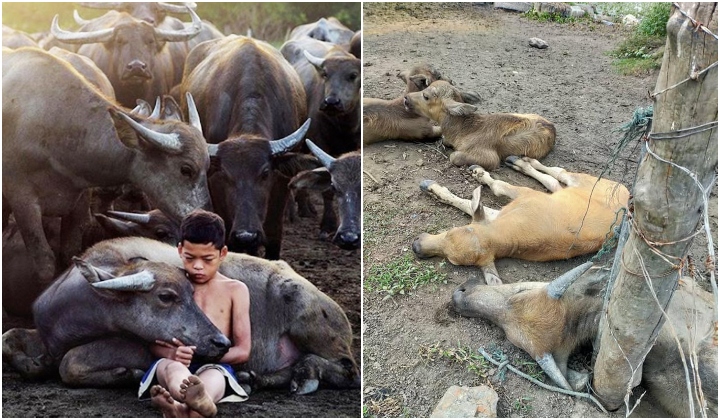 The young boy known as “Kampung Boy” or “Mowgli of Malaysia” Muhammad Syukur Khamis has had a sorrowful few days when 36 buffaloes on his family’s farm starting dying since Wednesday.

Muhammad Syukur expressed his sadness over their loss in a post on his official Facebook page Syukor Khamis – Kampong Boy, yesterday.

In the post, Muhammad Syukur shared several pictures of his buffaloes lying lifeless on the ground at their farm in Kampung Banggol Katong, Serada, Kuala Terengganu.

He said that the deaths have been one of his family’s greatest losses, adding that they do not discount the possibility that the buffaloes may have been afflicted with an illness.

Speaking to Sinar Harian, the 15-year-old said that he initially thought his buffaloes had been poisoned. However, he has ruled out that possibility after more buffaloes died the following day.

But it was not due to poisoning as more turned up dead including 11 today.

He also explained that based on the condition of the surviving buffaloes, at least five more may die soon.

Thankfully, two of his favourite buffaloes have managed to survive the illness.

At least two of my favourite buffaloes Samek and Along are still healthy and have been vaccinated.

Meanwhile, Muhammad Syukur’s father, Khamis Jusoh shared that this tragic incident is the first time they’ve experienced such a loss in their 50 years of rearing buffaloes, adding that their losses have been estimated to be around RM200,000.

He also explained how the Terengganu Veterinary Services Department had visited their farm to investigate the deaths.

Highly probable the buffaloes had died from haemorrhagic septicaemia but a final result can only be obtained in two weeks.

This morning, Muhammad Syukur shared an update that more of their buffaloes had died since last night.

His Facebook followers shared their condolences and prayed that whatever illness affecting his animals will subside soon.

Previously, Muhammad Syukur became an online sensation after photographs of him interacting with his buffaloes went viral on social media for the visual depiction of the bond between man and animals.

His expertise handling the buffaloes garnered international attention with many photographers, both local and foreign, paying a visit to their farm to photograph him.

A photograph of Muhammad Syukur with the buffaloes captured by photographer Mohd Nazri Sulaiman has also been selected to be on display at the Austrian Cultural Forum in Rome, Italy.