Senator Ras Adiba Radzi is currently the only representative for persons with disabilities (PWD) in the Malaysian Parliament. 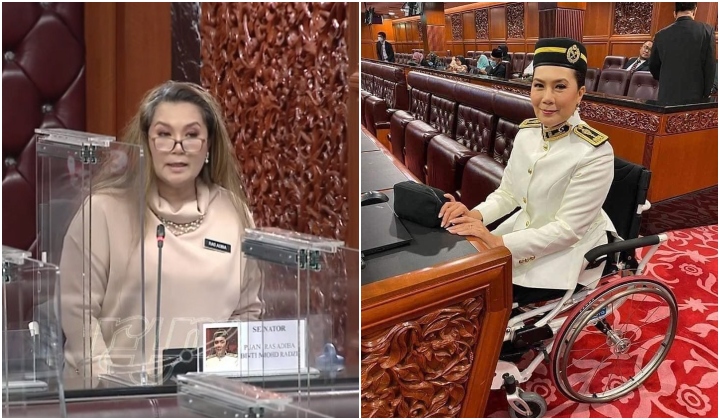 Many may have noticed a passionate figure in Dewan Negara, speaking out for the rights of persons with disabilities (PWD) in Malaysia.

That person is Senator Ras Adiba Radzi, the representative PWDs in the Malaysian parliament.

But what many find interesting is that the wheelchair-bound senator somehow manages to “stand up” while speaking in Dewan Negara, leading to some questions among curious Malaysians.

Aware of these questions, Senator Ras Adiba took to social media to reveal the magic of modern technology in aiding PWDs.

Many were puzzled how I managed to stand up during my speech in Parliament yesterday. I use a standing wheelchair to stand upright, as (I) am unable to do so on my own being a Thoracic 10 Paraplegic. Hope this info helps those who’d like to stand even for a moment.

In the 13-second clip shared on Twitter, the senator demonstrated how the wheelchair raises her from a seated to standing position.

Many were puzzled how I managed to stand up during my speech in Parliament yesterday.I use a standing wheelchair to stand upright,as am unable to do so on my own being a Thorasic 10 Paraplegic.
Hope this info helps those who'd like to stand even for a moment. pic.twitter.com/YTFQCgkqHq

A standing wheelchair is known as an assistive technology that supports the user in a standing position, thereby enabling them to have interactions with people and various objects at eye level.

Her display leads into a significant discussion whereby activists have long pointed out that disability is not about the state of a human body; it’s about the built environment, structures, and institutions that make life possible and meaningful for certain kinds of bodies and minds.

FYI, spectacles were also once considered assistive technology, as its function is as a medical aid. But it has culturally lost the stigma attached to it and is now also considered a fashion accessory.

How Senator Ras Adiba has been championing for disability rights

As she pointed out in her tweet, the senator suffers from a spinal injury – in the thoracic region – due to a car accident in 1995 that marked the beginning of her paralysis.

Six years later, she was assaulted by a group of men outside her house that worsened her injuries. But a fall one year after the assault led her to be permanently wheelchair-bound.

However, the spirited woman never let this stop her.

She went on to become a newscaster, participated in shooting events at the 2015 Para Asean Games 2015 in Singapore and even earned herself a spot in the Malaysia Book Of Records for wheeling a whopping 420 kilometres in 13 days from Johor Bahru to Putrajaya in 2003.

On 20th May, Ras Adiba was sworn in as a Senator, becoming the third person appointed to represent the OKU community in the Senate.

Since becoming a senator, she oversaw the historic move of implementing sign language interpreters for the live telecast of Dewan Rakyat and Dewan Negara proceedings.

This meant that people with hearing disabilities can now follow the parliamentary proceedings in real time, for the first time in Malaysian history.

She has also highlighted that her mission as a senator is to go to the ground and get more PWDs to register, especially in the rural areas.

Senator Ras Adiba also states that there is a dire need to destigmatise disabilities from a young age as persons with disabilities in Malaysia often feel like they are being treated as “adopted children.”

Which is why I have suggested that lessons on disabilities be taught in school, perhaps as early as pre-schools. This is so that fellow students can learn more about their friends with autism, or who are deaf or blind, among others. This way, the students will be able to accept and understand the children with disabilities better.

She is currently planning on introducing sign language as a third language in Malaysia, to be implemented at the nursery , school and tertiary institution levels so that Malaysians will be able to communicate with this group at work by the time they graduate.