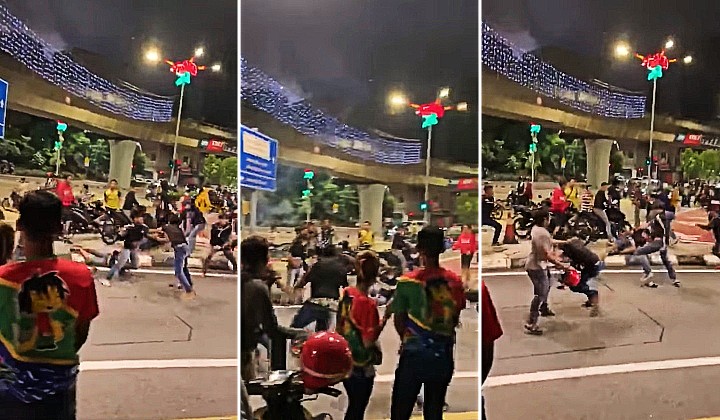 A massive street fight had apparently broken out near Dataran Merdeka, Kuala Lumpur in the wee hours of Sunday morning (August 23).

Videos posted online showed an altercation between several young men who have been stereotypically labeled as a rowdy gang of mat rempits.

The fight scenes showed a band of boys doing it out in the middle of a street, punching, kicking and screaming at each other, as a group of onlookers watched by.

Some were even seen armed with motorcycle helmets as their preferred choice of weapon.

Footage of the brawl had of course gone viral and prompted coronavirus concerns from the public.

Aside from the scenes of violence, netizens also had raised their eyebrows over the fact that most of the people who were there were clearly violating Covid-19 standard operating procedures (SOP).

Among the offenses seen committed during the delirious duel were the obvious lack of physical distancing as well as the absence of face masks on many of the people on location.

It is still unclear what exactly had caused the battle royal, but the police believe it might have only been a misunderstanding, and not at all related to gangsterism.

Apparently, no police reports had been made concerning the fight, but the cops said that the incident was being investigated under Section 148 of the Penal Code for rioting and causing a public disturbance.