Another day, another claim. 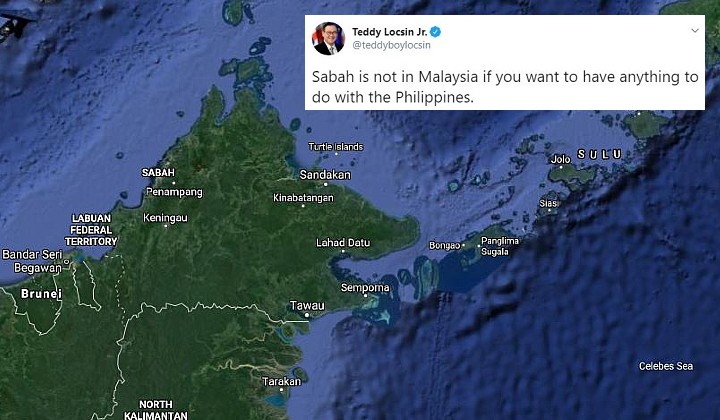 The Phillipine Foreign Affairs Secretary Teodoro Locsin Jr. raised the ire of Malaysians over a tweet declaring that “Sabah is not in Malaysia” – leading Malaysian Foreign Affairs Minister Datuk Seri Hishammuddin Hussein to summon the Philippines Ambassador to Malaysia on Monday to explain.

Teodoro Locsin Jr.’s contentious tweet was in reply to the US Embassy in Philippines who said on Twitter that they had donated hygiene kits to “returning Filipino repatriates from Sabah, Malaysia.”

Sabah is not in Malaysia if you want to have anything to do with the Philippines. https://t.co/dWZs1gsndE

He also followed up with a warning to the US Embassy to edit the tweet “if you know what’s good for you.”

His assertion over Sabah angered Hishammuddin who called it an irresponsible statement that affects bilateral ties between the two Southeast Asian countries, and asserted that “Sabah is, and will always be, part of Malaysia.”

This is an irresponsible statement that affects bilateral ties. @MalaysiaMFA will summon the Philippines Ambassador on Monday to explain. Sabah is, and will always be, part of Malaysia. https://t.co/KcUnDxOySl

Following the backlash from Malaysia, Teodoro Locsin Jr. remained adamant that his remark about Sabah not being part of Malaysia was “historically factual” and that no country can tell another “what it can and cannot say about what it regards as rightfully its own.”

You summoned our ambassador for a historically factual statement I made: that Malaysia tried to derail the Arbitral Award. This was reported to us by our diplomats on the scene and our German lawyer. None may share our Hague victory who worked against it. https://t.co/BzmWvE5NGQ

The Phillipine claim comes shortly after Malaysia announced that it had stopped paying the heirs of the Sulu Sultanate after the 2013 Lahad Datu attacks as a means to assert Malaysia’s sovereignty over Sabah.

The payments were done in accordance with an 1878 agreement between Sultan Jamal Al Alam of Sulu with the British North Borneo Company that stipulated North Borneo was either ceded or leased (depending on the translation used) to the company in return for a yearly payment of 5,000 Malayan Dollar.

Who Were The Sulu Who Invaded Lahad Datu 7 Years Ago?