Nur A’lia Batrisyia’s father passed away on the second day of Aidilfitri this year. 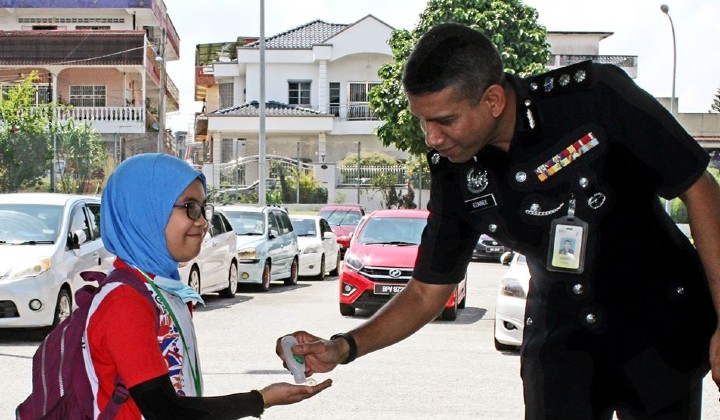 It was the norm for Nur A’lia Batrisyia to attend the first day school accompanied by her father, Corporal Ahmad Sukri Sabang but this time, it’s a bit different.

She recently lost her 42 year old father on 25 May – the second day of Hari Raya due to heart complications.

To fill some of the void left by her father’s passing, Petaling Jaya district police chief Assistant Commissioner Nik Ezanee Mohd Faisal has made the effort to accompany the girl to her first day of school.

She arrived in style, as the 9 year old rode in a patrol vehicle to school before the police chief helped her open the door and walked with her to the gates.

After her father’s passing, the family have been trying to make ends meet by selling kuih in Sungai Way and Nur A’lia would have to wake up as early as 4 in the morning to help her mother.

Nik Ezanee said it was done to school to honour her father’s service and memory as well as the sacrifices made by police personnel’s families everywhere.