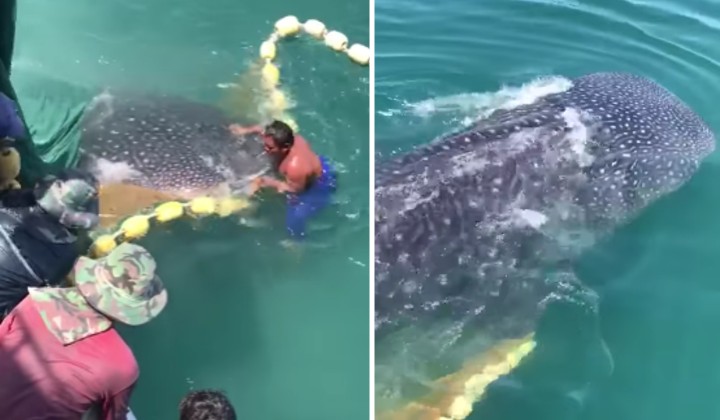 A whale shark was spotted off the coast of Kuala Kedah trapped in a fishing net and was later rescued by a fisherman who released it.

What you need to know: The Department of Fisheries released a video in which a fisherman was seen jumping into the sea to free a whale shark caught in a fishing net. The caption claims that this happened in the waters of Kuala Kedah and thanks the fishermen for their quick action.

This isn’t the first time whale sharks have been spotted in Malaysian waters. In fact, whale sharks show up pretty often as they live in all tropical waters. However, they are at risk of getting entangled in fishing nets and drowning. Malaysia has witnessed dead whale shark bodies being washed up on our beaches before. Hence, it’s a good thing that these fishermen were nearby to release the whale shark back into the waters.

Why it matters: Whale sharks are not dangerous at all, despite their size and name They are a slow-moving, filter-feeding carpet shark that feed on plankton and small fishes. They are also known for being the largest non-mammalian vertebrate.

Whale sharks are also commonly known to be playful and gentle towards humans, allowing us to swim close to them and even hold on to their fins (though you shouldn’t). However, the species is endangered due to fishing. They are illegally killed for their fins, skins, and oil.