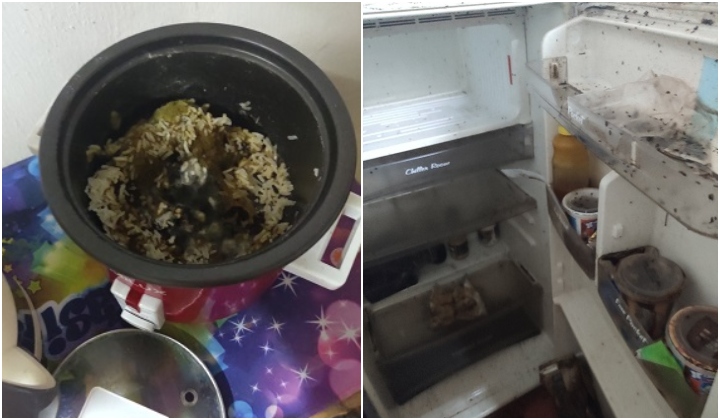 The definition of “tenant from hell” became abundantly clear this week when pictures of a home crawling with rats and maggots went viral on social media after the other tenants returned following easing of the Movement Control Order (MCO).

Norazirah, a PhD student at University Putra Malaysia (UPM), took to Twitter to share the revolting images of the rental flat in Serdang that had been left covered in filth by her housemate.

There were maggots in the fridge and under the carpets, rats in the cupboards with their feces strewn all over, a rice cooker with mouldy rice, unwashed plates with food scraps in the sink where rats feasted on, several bags of rubbish laying on the floor and an unbearable stench in the air.

According to her, the flat was shared with several UPM students and the one “nightmare tenant” who stayed back during the MCO as she was still working.

A few days before we returned to the flat as the university campus was opening, our landlord told us that she had suddenly left and moved elsewhere. We had all cleaned the house together before going back to our homes, but she decided to leave us all a “gift” instead.

What’s more, when she informed the 70-year-old landlord of the house’s filthy condition, all he could say was, “I consider the tenants as my children, so I rent the home for cheap because I know many are facing difficult times.”

Facing a literal nightmare, the tenants – including the landlord – began cleaning up the repulsive mess, which included picking up the maggots one by one and trapping the rats.

Norazirah told us that it took them 5 days of working together to clean up the house. Even so, they’re only about 80% done with many of the appliances destroyed beyond rescue and they are now saving to buy a new fridge to replace the maggot-infested one.

Naturally, the horror story of this tenant from hell had Malaysians online riled up in anger and disgust.

But Norazirah simply wanted her misfortune to serve as a reminder to all tenants to be respectful of someone else’s home.

[TRIGGER WARNING] You can see the filthy images in the Tweets below: