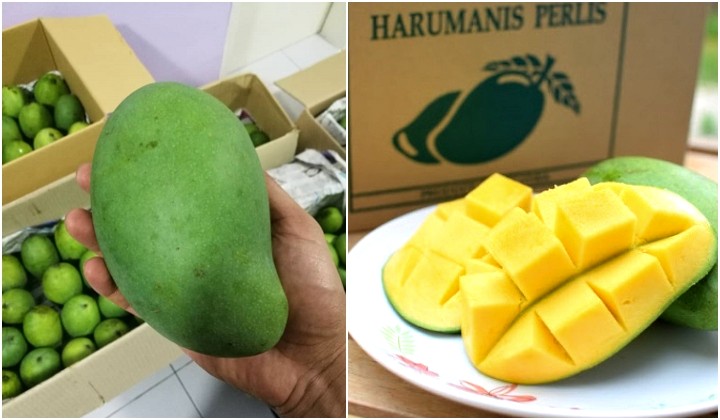 Perlis, the diminutive northern state, has always been the butt of jokes for its size. But much like the Malay proverb kecil-kecil cili api, the small state is a fiery one when it comes to defending their trademark Harumanis mangoes.

Harumanis mangoes are botanically classified as mangifera indica, a popular Indonesian mango variety that gained the sweet name due to its, well, sweetness and fragrance.

Harumanis is considered the ‘‘King of Mangoes’’ and is very popular in Malaysia, with even Japan specifically requesting this mango because of this very sweet and aromatic fragrance.

The Harumanis industry is also estimated to be worth RM70 million.

So it’s pretty clear that the mango is quite lucrative with many clamouring for the sweet fruits of their labour.

While the Harumanis is synonymous with Perlis that has about 1,200 hectares of land dedicated to the fruit, several states have been cultivating the mango breed as well.

There’s the Kedah Harum Manis Association with about 100 farmers in the state growing this mango. Reports of Kelantan, Terengganu and Perak growing and selling the Harumanis also flutter through news sites.

However, Perlis is less than pleased with other states attempting to get a slice.

The Perlis Harumanis Entrepreneurs Association made a public plea to other states to stop using the Harumanis name for their mangoes.

No party is allowed to use the name for their product, even if the fruit is grown elsewhere.

And it turns out that he’s right – Perlis is the only state allowed to use the Harumanis name on its mangoes since it’s registered with the Intellectual Property Corporation of Malaysia (MyIPO) as a Geographical Indicator in  2011 on behalf of the Perlis Agriculture Department.

Its director-general Datuk Mohd Roslan Mahayudin told Sinar Harian that farmers outside Perlis who use the Harumanis name can be liable for action in court under the Geographical Indications Act 2000.

Should any party claim their mangos are Perlis Harumanis when they were actually produced elsewhere such as in Kedah, Kelantan and such, an injunction can be made and compensation claimed under Section 5 of the Act, for providing a misleading picture on the Geographical Indicator product.

Section 5 of the Geographical Indications Act 2000 refers to goods that can mislead the public to its geographical origins. If violated, it states that the court may “grant an injunction to prevent any unlawful use of the geographical indication and award any damages and legal remedy as it deems fit.”

Perlis’ hold of the name isn’t forever, though, the trademark registered with MyIPO is valid only until 2021.