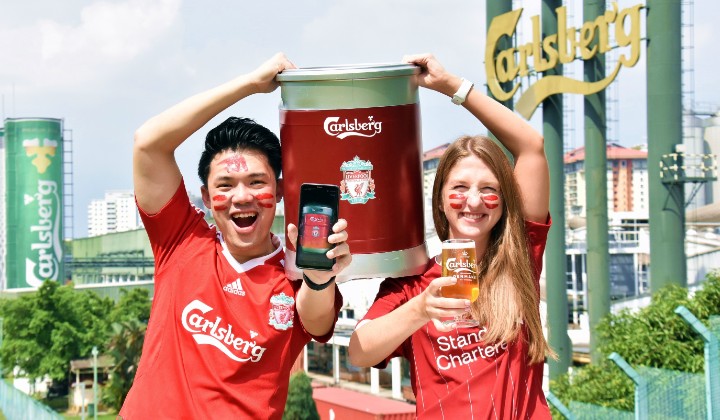 The 2019/2020 Premier League season is historic, not just for the eerie silence of empty stadiums, but for the legendary champion win by Liverpool Football Club, their first ever since the league began in 1992.

Liverpool FC had an iconic year, starting with their European Cup triumph in June 2019 and ending with the stunning Premier League victory, bagging a total of 18 consecutive wins, a record-breaking 22 consecutive home wins, and a shocking 25-point lead in the table.

In response, Liverpool FC sponsor Carlsberg is celebrating by giving fans a chance to raise their glasses with the Red Champions Kit, including a virtual Red Keg they can purchase for RM500 that comes with two limited-edition Liverpool FC Carlsberg glasses and 100 Carlsberg beers that can be redeemed and shared at participating bars, restaurants, and bistros nationwide.

This special Red Keg is only available for the first 100 fans who are registered users of Adopt A Keg, another initiative by Carlsberg to help Malaysian F&B outlets make a comeback after the drop in business during the MCO.

Both the regular keg from Adopt A Keg and the special Red Keg can be redeemed up to 10 glasses a time from participating outlets. The virtual keg balances can also be shared digitally- so you can toast your fellow fans regardless of where you are!