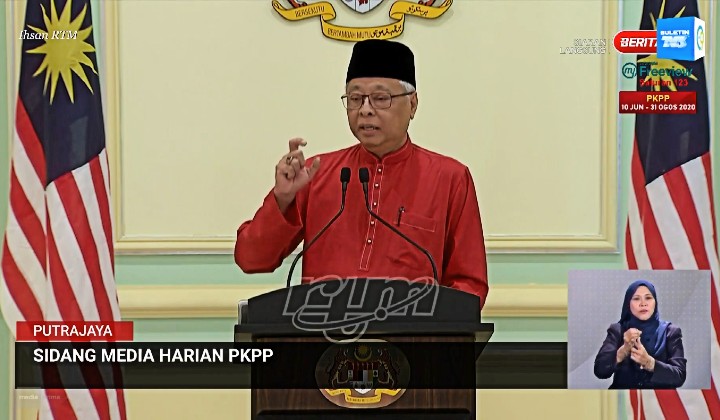 As usual, our Senior Minister (Defense) Datuk Seri Ismail Sabri Yaakob appeared on camera today to provide his daily brief regarding the internal situation involving the nation and Covid-19.

Here are the important bits of his speech;

With the expected increase in traffic on Malaysian highways, as the public can now travel freely between interstate borders during the Recovery Movement Control Order (RMCO) period, Ismail Sabri again reminded Malaysians to maintain their etiquette in respects with the government’s standard operating procedures (SOPs).

Travelers who would be making stops at the nation’s many Rest and Service (R&R) areas are required to record their attendance either manually or with the use of the MySejahtera mobile application before they are allowed to use rest stop facilities.

R&R visitors would also need to abide by hygiene and social distancing measures while using facilities such as toilets or suraus.

Muslims are required to bring along their own prayer equipment, such as prayer mats or attire (kain pelikat and telekung) to use R&R prayer rooms as well as maintain strict hygiene when undertaking their Wudu (ritual cleansing).

Playgrounds on all R&R facilities would also be closed off to the public.

Seminars and training courses to be allowed soon

With loosened restrictions during the RMCO period, the government is now allowing meetings, talks, seminars, training courses and the likes to resume.

However, Ismail Sabri said the government was still in the midst of preparing guidelines before these events and gatherings can take place safely according to procedure.

The minister said that guidelines would be out by Monday.

As mosques and suraus are now allowing worshipers to return to religious activities, Ismail Sabri said that the government would be renewing the SOP set for other non-Muslim places of worship such as churches and temples.

Currently, non-Muslim places of worship are only allowed to operate on a limited capacity, with facilities open at least once a week to allow for religious activities to take place.

Ismail Sabri mentions that the matter would be handled by our National Unity Minister Datuk Halimah Mohamed Sadique, and announcements would be made by Monday.

The public is entitled to request proof that foreign workers employed at salons and barbershops have undergone mandatory Covid-19 testing.

Ismail Sabri said store owners who refuse to cooperate would face action and asked the public to report to the authorities of any businesses that fail to comply with the rule.

Ismail Sabri also adds that despite fewer restrictions during the RMCO period, there are still people who are being caught violating SOPs.

The minister advised the public to remain vigilant during their daily life and activities and to always abide by guidelines provided by the government to avoid legal consequences and to curb the spread of Covid-19.