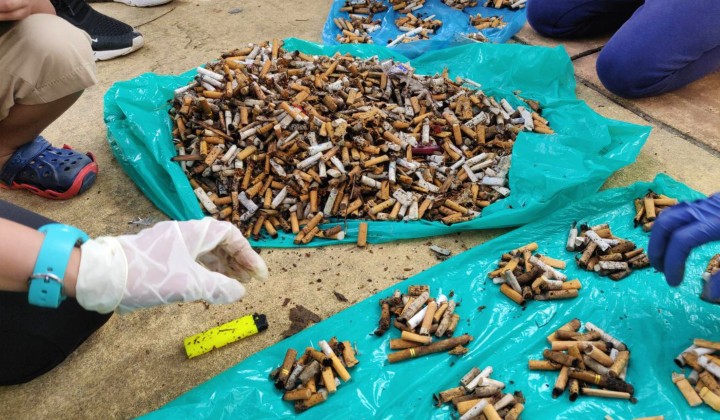 A Japanese man shared on Twitter how he recently picked up 4,500 cigarette butts at Ayer@8 in Putrajaya during a volunteer clean-up programme earlier this year.

Posting a picture of the cigarettes, the man known as @NanaCyber2 lamented on how there were so many cigarette butts littered throughout the area.

So many cigarette butts littered everywhere.

In a follow-up tweet written in Malay, @NanaCyber2 explained that he picked up the cigarette butts during a one and a half hours volunteer clean-up session with environmentalist group Trash Hero Putrajaya several months ago.

Based on his Twitter bio, @NanaCyber2 currently lives in Cyberjaya, enjoys volunteering for various charity initiatives and is learning the Malay language.

Meanwhile, another Twitter user said that Malaysians still have a long way to go when it comes to being mindful of disposing of their litter properly.

I think the problem is that people think it’s okay to litter since their rubbish will be picked up by cleaners anyway. We need to instil the mindset of ‘I have to throw away my own rubbish’ from a young age.

It appears that this isn’t @NanaCyber2’s first clean-up volunteer work. In another Twitter thread, @NanaCyber2 shared pictures of plastic bottles he picked up with another group of volunteers in February near Gem In Mall in Cyberjaya.

On February 29 before the movement control order, I did a clean-up near the Gem In Mall with volunteers from Trash Hero Putrajaya. We picked up 202 kilogrammes of rubbish including bottles, cigarette butts, and more.

Cult AIRism Line From Uniqlo Will Soon Adorn Your Bed

In Exciting News, Malaysia-Japan Travel Bubble Might Open In September