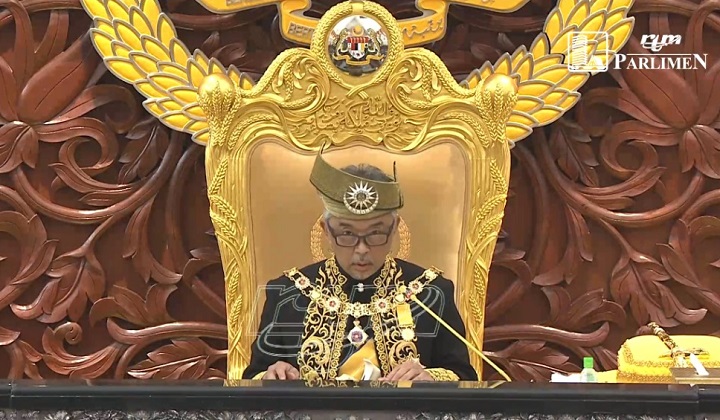 At the opening of the first Parliament session this year, history was made for the first ever 1-day sitting where only the Yang di-Pertuan Agong Al-Sultan Abdullah Ri’ayatuddin Al-Mustafa Billah Shah gave his customary opening address before it was adjourned.

However, the YDPA touched on some important points in his speech, noting the extraordinary circumstances and hardship faced by Malaysians during the Covid-19 pandemic.

Expressing his gratitude to healthcare workers, police, immigration, military, civil defence,  National Disaster Management Agency and other agencies involved in the fight, His Majesty led the entire hall filled with Members of Parliament (MP) and Parliamentary staff to a rousing round of applause for the brave frontliners.

In his speech, the King also touched on various issues surrounding Malaysians including housing, cost of living, climate change, border defence and the economy. He explained that these are the issues that his government will pay close attention to in the coming months and years.

Despite all these plans and programs towards the formation of a stable and prosperous developed country, the King pointedly stated that it can never be a reality if the nation continues to grapple with corruption.

I urge everyone to remain committed to the national anti-corruption plan so that every national development agenda will not be eroded by corruption, embezzlement and abuse of power. We must plant in the minds of our community that corruption is disgusting, dirty and must be fought to the end.

The King also advised the parliamentarians to not drag the country into political turmoil once again, especially when Malaysians are plagued by many difficulties brought upon by the pandemic.

He expresses his wish that national unity and harmony begins in the hallowed halls of the Parliament, calling for the MPs to lead by example.

As a leader, you must set the example for the people. Difference in opinions should not resort to name calling. You must show maturity, and protect the well-being of the people and the country.

The King ended his speech with a prayer for the Malaysians and the country to be blessed and protected by God, along with a Hari Raya Aidilfitri wish, and a sincere “maaf zahir dan batin” from the royal family.