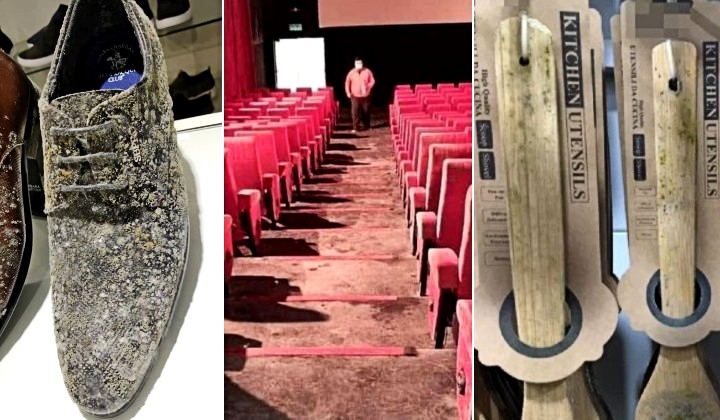 So for the past couple of days, Malaysians have been exposed to viral images of mold-infested items and furniture sprouting about on social media.

Pictures of leather clothing and accessories, kitchen utensils, and even an entire movie theater covered in an awful layer of fungus have had the public riled up in disgust and spored some pretty interesting responses.

Malaysia should just change its name to Mouldlaysia because wtf is this 🤢 pic.twitter.com/0DTlfStVjS

But despite some of the more objectional comments questioning the nationâ€™s hygiene and cleanliness, there were also a number of bright-minded Malaysians who stepped in to provide a quick mycology lesson to their online colleagues.

One Twitter user pointed out that as Malaysia is situated in the tropics, having fungus, yeast, mold, mildew, and mushrooms everywhere and all year round is just a given.

But we are in the tropics, what do u expect? https://t.co/JzXS7F7SFC

morpheuse went on to explain that fungi thrive in warm and humid environments as well as places where air circulation is relatively poor, and he is absolutely right about that.

Mold and mildew are types of fungus that love to grow on moist, warm surfaces and are usually naturally found growing on dead or rotting organic materials.

However, these survivalist eukaryotes do have the tendency to sprout in areas you donâ€™t want emâ€™ to, like on the walls of your toilet or inside an old cupboard you have laying around.

Not only are they an ugly sight, mold and mildew also slowly eat away at the surfaces they’re attached to, causing damadge and may result in some severe structural defects if left unchecked.

There are literally thousands of species of fungi out there with spores that are carried by the wind, allowing these things to grow on almost any surface that they can latch on to, even glass.

Interestingly, another Twitter user came out explaining that the fungi-friendly environment we have here in Malaysia is the reason why our forefathers preferred to use wooden and rattan items to furnish their homes.

KEN continued to elaborate that we might already be breathing in the millions of tiny fungal spores that are already present in the air around us, which if you ask me, already sounds really foul.

But, a clear danger of fungus, besides the ones that are toxic, is that great large concentrations and long exposure to spores can cause a myriad of health problems, allergic reactions, and in serious cases even death.

If youâ€™re not too keen on having fungi happily munching away on your property, there are several ways for you to have it removed.

One sure-fire step is to put some elbow grease on and simply scrub away at the fungi plagued surface with either any anti-fungal cleaning products that are available over the counter or a homemade mix of bleach or vinegar-based solution to effectively eliminate the unwanted infestation.

In some situations, fungal growth can get a little out of hand, growing in large quantities or in places where it would be impossible to clean conventionally. For this, it is advised to call in the experts to have your fungal problems be dealt with professionally.

As an added measure, itâ€™s also prudent to keep your homes, businesses, or any other areas you wouldnâ€™t want fungus to grow on, clean and free of moisture as well as to ensure that spaces are adequately ventilated to ensure optimal airflow.