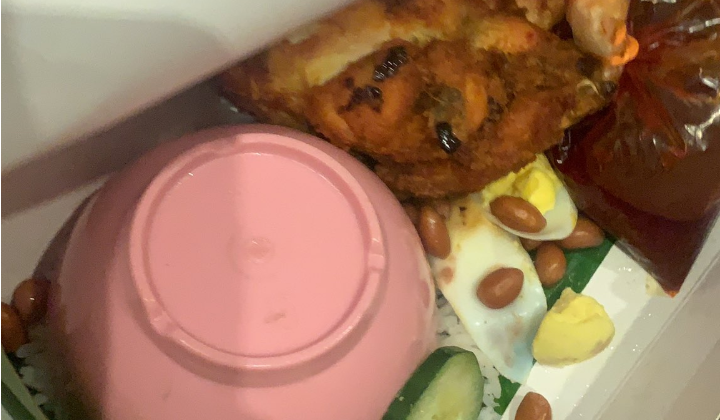 Ever since the Movement Control Order (MCO) began on 18 March, Malaysians have opted to use food delivery services mainly for convenience and also because we can’t really go outside.

Already a week into Ramadhan and with the MCO now in its fifth phase, we have somewhat adjusted to the reality of not having the luxury to buy food from bazaars and instead use apps to get some berbuka treats.

The thing is, sometimes what we order might come with a “free gift” as one Twitter user discovered when he ordered nasi lemak from a local vendor online.

After opening his packet, what he found on top of nasi lemak was a pink bowl, which is presumed to be the apparatus used to put the rice inside the container.

Amused by his discovery, he shared a picture online which then caught the attention of netizens.

They were also quite entertained with what he found as some commented that he was indeed a lucky customer who’ve just won himself a brand new bowl.

Others even pointed out that it could’ve been used as a container for the sambal.

Whatever the reason might be for the sudden appearance of the pink bowl, it’s a pretty funny thing to happen on Ramadhan and it did give us a few giggles.