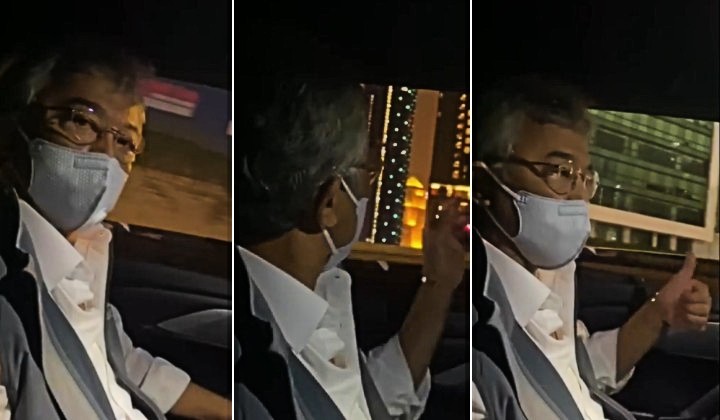 While some Malaysian VVIPs were allegedly loitering about unofficial business during the nationwide Movement Control Order (MCO), others had more important things in mind.

The Yang di-Pertuan Agong (YDPA) Al-Sultan Abdullah Riâ€™yatuddin Al-Mustafa Billah Shah recently went on ground to inspect the streets of Kuala Lumpur and observe the cityâ€™s night traffic during the 3rd phase of the MCO.

In a video shared by the Royal Palaceâ€™s official Instagram page, the YDPA is seen in a face mask, riding in the back seat of the royal limo, and seemingly taking in KLâ€™s glistening cityscape that’s moving past his open window.

In the middle of the 17-second clip, the King gives a quick â€œthumbs upâ€, as if gesturing his approval at the nationâ€™s efforts in combating the Covid-19 pandemic.

The YDPA mentions that he was overall satisfied with the compliance shown by the rakyat during the lockdown and hopes for continued support towards the nation’s effort to ensure the wellbeing of the country.

During the first few days of the MCO, the YDPA had taken to the wheel personally to survey how Malaysians were respecting the implemented lockdown orders.

In the video, the YDPA was heard mentioning that there were still drivers on the road that ignored restrictions whiles hoping that the public would abide by the rules set in place.