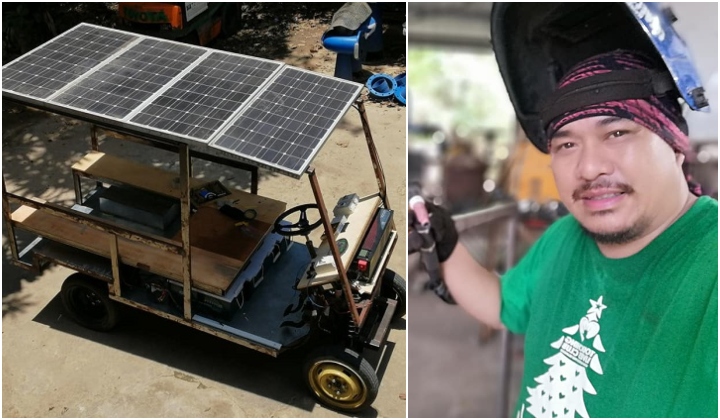 Not keen on wasting time, even during a 14-day quarantine, Sabahan Senator Adrian Banie Lasimbang made full use of his time to make a solar powered buggy.

After being instructed to isolate when a close contact of his tested positive for Covid-19, the 43-year-old told Channel News Asia (CNA) that he decided to embark on this long-postponed project.

I had always planned for a solar buggy, but kept putting it off, because my team and I were busy with micro-hydroelectric projects here in Sabah and around the country.

As the Movement Control Order (MCO) was in effect, Adrian and his team couldn’t carry out their usual projects and some couldn’t even go back to their hometowns. So, they decided to build a prototype of a solar-powered electric buggy that could be used by rural communities.

Adrian told CNA that the goal was to create a usable and affordable transport system and power source for rural villages.

Villagers from rural communities currently depend on generators that run on expensive fuel for electricity. They also spend a significant amount of time and money to go to the nearest town to bring back fuel to run their generators and motorcycles.

Adrian documented the project on his social media, sharing progress pictures of the buggy and doing a mini tour of the workshop behind his house.

He built the frame using materials from the workshop including solar panels, integrating the electrical power system with the drive system, a 5.3 horsepower direct current (DC) motor and a steering system which was salvaged from an old Proton Wira.

It is also fitted with an inverter, to regulate and convert the flow of DC (direct current) power from the battery to AC (alternating current) which lets it power other electrical appliances.

The buggy’s 1000Ah solar battery bank allowed it to supply power of 5 kilowatts for up to 2 days, which Adrian says is enough to run basic appliances like fan, lights, television and phone charging.

Test runs also show that the solar electric buggy has a top speed of 25km/h. It’s no Speedy Gonzales but it can fit six people, and useful for farmers to transport harvested rice from paddy fields.

While he’s pleased with his prototype, Adrian told CNA that he’d still like to improve the vehicle’s safety and weight. However, he is optimistic about its potential.

If we can finish this, and once the MCO is lifted, I’d like to see how we can go about getting the buggy certified for public use, such as going to the Road Transport Department or the Ministry of Science, Technology and Innovation.